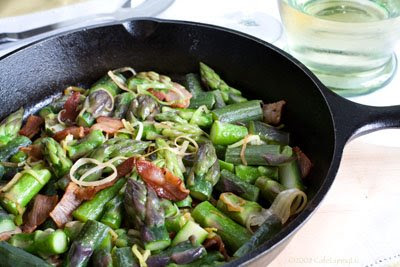 Two posts in one day! I thought I was doing really well until I realized that I had not written any text to go with this delicious asparagus dish. It’s such an easy dish, maybe that’s why I failed to write about it.Everything Michael Chiarello cooks is so casually elegant and has lovely table appeal and color. I have two of his books and constantly pour over them for not only recipes I know will work, but for his tips on how to beautifully display his food, pantry necessities, and basic kitchen equipment. In his book, “At Home with Michael Chiarello, he lists his top five cleaning agents and all are either already in your home or easily obtainable. Club soda is his number one favorite on the list as his basic stain fighter. When doused on spills, stains are less lightly to become permanent. Cream of tarter is great mixed with lemon juice which acts a bleach for white clothes stained with food.Denture cleaning tablets was a real surprise to me. These tablets when dissolved in a little cold water cleans stains off of linen tablecloths. Dishwasher liquid can be rubbed directly into the stain while meat tenderizer and cold water mixed together can remove meat juice stains, milk and other stains which contain protein.But I digress! Try Michael’s easy asparagus dish and it will become a favorite for family and friends. 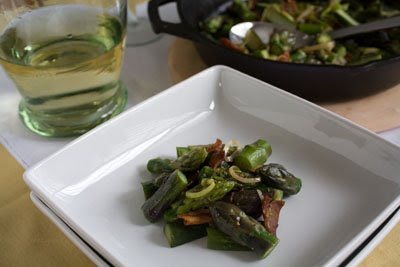 From Michael Chiarello’s “Casual Cooking, Wine Country Recipes for Family and Friends”2 pounds medium asparagus, I used half purple and half green asparagus 2 tablespoons extra-virgin olive oil 2 ounces thinly sliced pancetta, unrolled and cut into 1-inch lengths 1 cup thinly sliced leek, white and pale green parts only Sea salt, preferably gray salt, and freshly ground black pepper Holding an asparagus spear in both hands, bend the spear until it breaks naturally at the point where the spear becomes tough. Discard the tough end and repeat with the remaining asparagus. Cut the asparagus into 1-inch lengths. Bring a large pot of salted water to a boil. While the water heats, heat the olive oil in a skillet over medium-low heat and cook the pancetta until the pancetta is almost crisp, about 5 minutes. Add the leek and saute until softened but not colored. Add the asparagus to the boiling water and cook until just tender, 3 to 4 minutes. Drain and add to the skillet. Season mixture with salt and pepper and toss to coat. Transfer to a serving bowl and serve immediately. Serves 6. 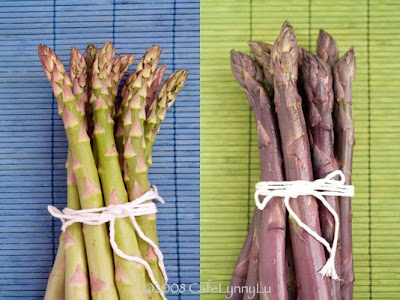