Blackberry season is in full swing where I live and only a few miles away is a local berry farm stand laden with buckets and buckets of just picked juicy blackberries, some tinged with red. It’s my favorite summer obsession, but the berries freeze well so I can have a taste of the summer anytime of the year.  As I buy the blackberries, memories come back of England and of summer days spent riding our bikes on the narrow farm roads in East Anglia searching the hedgerows for bramble berries, our pails clanging on the handlebars.  We probably ate as many as we picked, our fingers purple from the juicy berries. What takes me five minutes to buy blackberries would take us most of the day, but the fun we had was priceless. 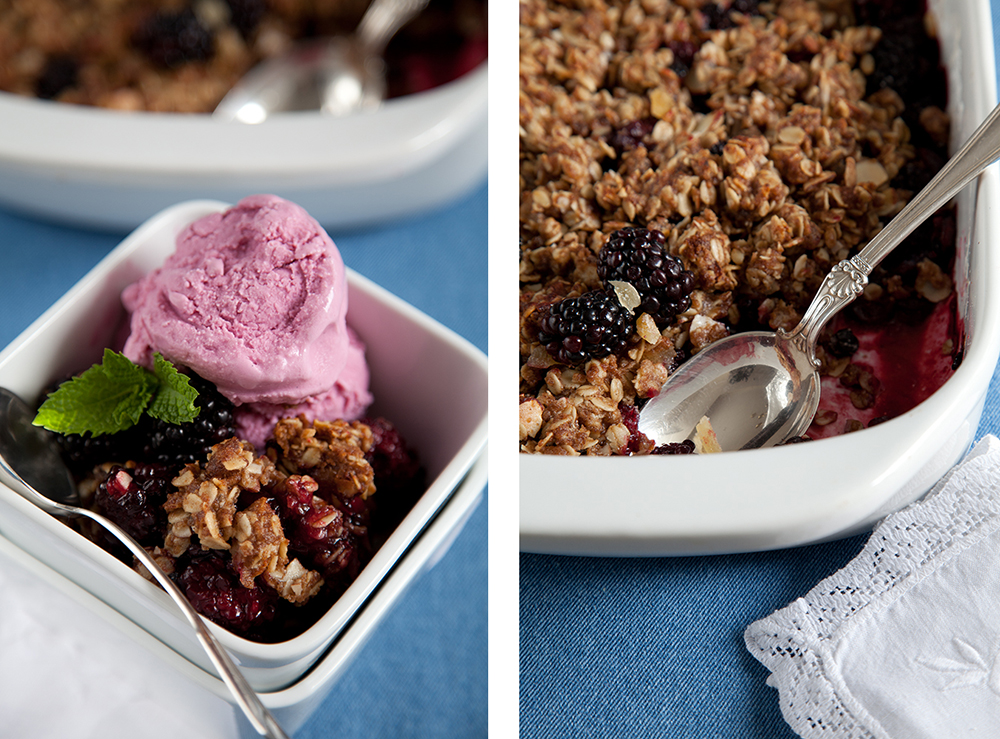 Blackberries, as well as raspberries and strawberries are members of the rose family and are often called caneberries or brambles as in Britain. Not a true berry, the blackberry is known as a drupelet berry,   those which have juice sacs. Once only grown wild, the blackberry has been cultivated since the 1820’s and the varieties due to cross pollination are endless. Blackberries are loaded with antioxidants, low in calories, high in fiber and water which helps control hunger as well as controlling blood sugar.

If one took a poll on a favorite blackberry dish, I’m sure a cobbler or a crisp would be the first in mind. Either dessert is simple to prepare and is welcomed at any gathering. I’ve made some slight adjustments to the traditional blackberry crisp, adding some mixed dried berries and vanilla sugar to the filling and crystallized ginger and sliced almonds to oatmeal based topping. And while vanilla ice cream is delicious, a big dollop of blackberry frozen yogurt takes the blackberry crisp to the sublime.

Stir melted butter into the topping and spoon atop the blackberries to cover, but not fully. Bake 25-30 minutes until browned and bubbly. Serves 4-6. Recipe adapted from here Serve with blackberry frozen yogurt (recipe follows).

Set the two cups of yogurt in the refrigerator. Cook the blackberries with the sugar, lemon zest and salt in a medium saucepan over medium high heat, stirring frequently, for 15 minutes, or until thick and the berries are very soft. Remove from heat; pour through a large strainer set over a bowl, pressing down on solids to extract as much juice as possible. Refrigerate, covered until very cold, about an hour.

Whisk together the blackberry pure and lemon juice in a bowl. Add the yogurt, half-and-half, whole milk and vanilla. Refrigerate for an hour. Pour the mixture into an ice cream maker and freeze according to manufacturer’s instructions. After churning, the ice cream will be soft, but ready to eat. If a firmer texture is desired, transfer to a freezer container for at least two hours. The ice cream is best served the day it is made. Longer freezer time results in a very hard and crumbly ice cream. Makes about 1-1/2 quarts. Recipe from Luscious Berry Desserts by Lori Longbotham. 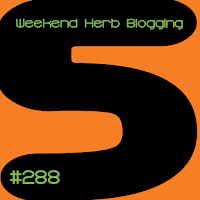 This is my entry in  Weekend Herb Blogging #288 managed by Haalo and hosted by Winnie of Healthy Green Kitchen.