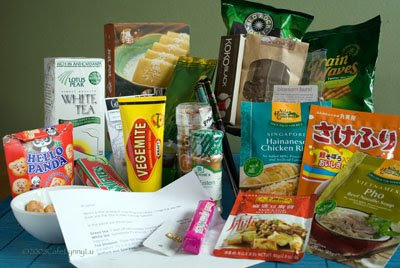 I felt like a kid at Christmastime opening my box the postman left at my door! I couldn’t wait to tear through the packaging to see what goodies I had been sent from from the Land Down Under. Lovely Asian sauce packets, dark chocolate, teas, chopsticks, just great stuff I’ve never seen where I live. Thanks Agnes! It’s uncanny that you picked out so many of my favorite things. Thanks to Stephanie of Dispensing Happiness who organized Blogging By Mail-Small Things. Eighty five bloggers worldwide signed up to swap packages containing small things. It’s quite an exciting way to meet someone from another part of the world and to receive treats from someone who loves food as much as I do.Here is a list of what I received in my “small things mean a lot” box:Green and white teaA beautiful tea blossomSnifter and Sparkles-candiesEgg Rolls and Hello Panda biscuits, little panda embossed biscuits filled with chocolateKoko Black dark chocolate which was nearly gone before I took the photo, and Koko Black hot chocolate.Two sets of chopsticksTwo packets of crisps;lime and black pepper, and sour cream and chiveA chilli and garlic grinderHarissa-a Middle Eastern spice mix I have always wanted to tryPink Salt which comes from the Murray River, the longest river in AustraliaFurikake rice seasoningSeveral packet mixes such as Pho, tofu and Hainanese chicken rice for quick meals of favorite Asian sauces which require ingredients not easily found.A South Pacific lapel pin.And-last, but not least!VegemiteI had never heard of Vegemite until this song by Men At Work, one of my very favorite songs ever! I’ll have to have a Vegemite and cheese sandwich as Agnes suggested.