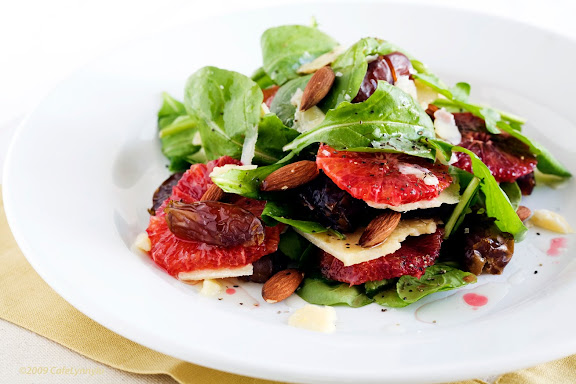 Blood oranges never fail to excite me when I see them come into the grocery stores around January. This year, I was disappointed that the blood oranges, although lovely and dark-red fleshed inside, were light orange on the outside with none of the traditional blush red color on the skin. After some research, I find that the oranges are actually, Cara Cara navel oranges harvested from Venezuela during the months of October through January. My letdown didn’t last long, for when I tasted the oranges, I found them to be tantalizingly sweet with few seeds. My four oranges cost me $4, so the dish I made had to be special. Back home, I pulled a few of my favorite cookbooks off the shelf. Among them was Suzanne Goin’s “Sunday Suppers at Lucques, Seasonal Recipes from Market to Table”. Goin opened her Los Angeles restaurant, Lucques, in 1998 and since then has amassed many culinary awards. Sunday suppers at Lucques is Goin’s successful effort in recreating the spirit and ambiance of the leisurely dinners she enjoyed as a child with her family; classic comfort foods based on seasonal produce. The recipes in the book are arranged in three-course menus and organized by season. If there was ever a book I would like to cook my way through-this one would definitely be the one!To showcase the blood red oranges, I chose one of Goin’s many layered salads which,unlike tossed salads, lets each fresh ingredient shine by artfully weaving each layer to create a tapestry of sorts.Fresh Medjool dates, toasted almonds, a medium aged Parmesan cheese and arugula impart color and texture to the salad which is drizzled with a pure almond oil and the juice from the ruby red oranges. 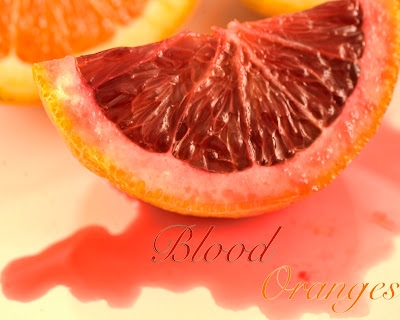 Blood Orange, Date, Parmesan and Almond Winter Salad1/2 cup raw almonds15 Medjool or Deglet Noor dates ( less sweet than the Medjool)4 large blood oranges1/4 pound chunk of Parmesano Vecchio, or Parmesano Reggiano2 ounces arugula3 tablespoons pure almond oil. Ms Goin recommends Huilerie Leblanc.Sea salt and freshly ground black pepperPreheat oven the 375°F. Spread the almonds on a baking sheet, and toast for 8-10 minutes, until slightly darkened and smell nutty. Take care not to burn.Cut the dates in half lengthwise and remove the seeds. Slice the ends off of the oranges. Stand the oranges upright and following the contour of the orange with a knife, remove the peel and white pith. Work from the top to the bottom, turning the fruit as you peel. Catch some of the juices as you go.Slice each orange into 8-10 slices. Place the Parmesan cheese, flat side down on a cutting board. With a chef’s knife, shave eighteen large thin slices of cheese from the chunk.To assemble the salad, scatter one-third of the arugula on a large platter. Arrange one-third of the oranges, dates, cheese and nuts. Scatter another layer of arugula, and repeat layering, letting each ingredient intertwine, but not pile up on one another. Drizzle the almond oil over the salad and season lightly with sea salt, pepper and a squeeze of blood orange juice.Serves 6.