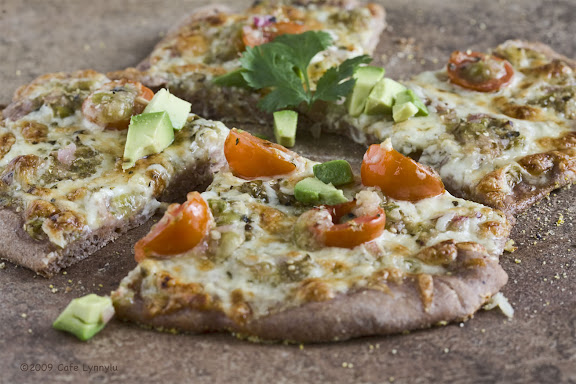 Still playing around with ways to use blue cornmeal, I was inspired to develop a recipe for a Southwestern pizza with the blue cornmeal incorporated in the pizza crust. Aesthetically speaking, I wasn’t sure how a blue pizza crust would go over in my family of die-hard pizza aficionados, but luckily, they are used to my experimentation in the kitchen. This pizza was a hit! A very earthy pizza which reminds me so much of the Southwest flavors I love.

Using the basic ratio dough for bread from Michael Rhulman’s book, “Ratio-The Simple Codes Behind the Craft of Everyday Cooking”, I substituted blue cornmeal for part of the flour in the recipe, then threw in a teaspoon of minced chipotles en adobo to add a tiny bit of heat to the pizza dough. “Ratio” should be in everyone’s library of must have cookbooks. Rhulman’s theory is simple.When you know a culinary ratio, a proportion of one part to another, such as the bread dough from which my blue cornmeal pizza dough is made from, you are able to make many variations. Basically, you are working with parts.  Bread  dough is 5 parts flour and 3 parts water. To ensure accurate measuring, a digital scale that measures in ounces and grams up to 5 pounds with a “tare”or zero button is essential. Rhulman’s book, “Ratio” is available not only in hardback and paperback, but has a Kindle edition and an app for a Smartphone. 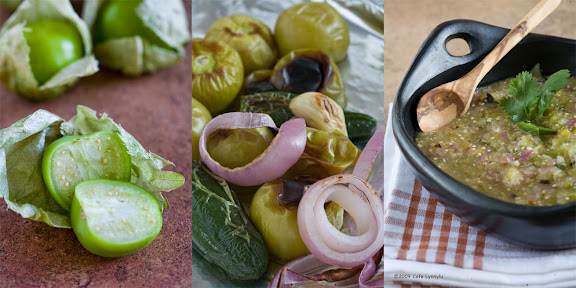 A simple tomatillo sauce, roasted along with red onions, jalapeno peppers, garlic and onion to bring out its complex flavors, serves as a base for the toppings of jack cheese, halved cherry tomatoes and a sprinkle of dried oregano. Diced avocado  scattered over the pizza after baking perfect this rustic Mexican style pizza. Roasted tomatillo salsa recipe here. Michael Ruhlman’s  homemade pizza here. 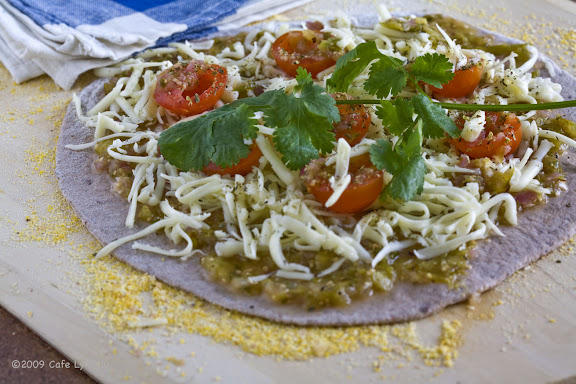 After making this dough several times, I have reduced the amount of blue cornmeal that I used in the original recipe. The pizza was a bit too “earthy”. Here is the amended recipe based on the master recipe (recipe follows pizza dough) for bread dough in “Ratio”. The dough is easily made in the bread machine.

According to manufacturer’s for your bread machine, add the ingredients to the pan. Process on the dough cycle. Regarding the chipotles, I usually knead them in after removing the dough from the bread machine pan or during the last knead cycle on the bread machine. Most bread machines have the modes broken down into total time and the duration of each cycle. While dough is being processed, prepare roasted tomatillo sauce. Preheat a baking stone in a 450° oven for at least 30 minutes.When dough cycle is complete, transfer the dough to a lightly floured work surface. Divide into desired number of balls. Cover and let rest for 10 minutes.  Roll out dough into a thin circle. Place on a peel which has been dusted with cornmeal. Spread salsa over the dough. Sprinkle with shredded jack cheese, halved cherry tomatoes and dried oregano. Slide pizza onto baking stone in oven. Bake 15-20 minutes or until cheese had melted and pizza is bubbly. Remove from oven.  Repeat process with remaining pizza dough.To serve, garnish with diced avocados and cilantro.    Makes two large or 4 small pizzas.

In a non-stick saucepan over medium high heat, place the tomatillos, cut side down, the garlic, jalapeno peppers, and red onion. When browned, about 3 minutes, turn everything over and roast the other side. When browned, remove from heat and pour into the bowl of a food processor to cool. Add cilantro and blend to a coarse puree. Add salt to taste. If mixture is too thick, add a few tablespoons water. Set aside while rolling out pizza dough.

Process dough either by bread machine or conventional method.