Not all beef stews are alike! This Dutch braised beef dish is hearty, aromatic with rosemary, bay leaves and heady from the mulled wine Bischopswijn) plus, just a touch of sweet boozy flavor from the  addition of brandied raisins (Boerenjongens), recipe below.  I served this over rice, but also a parsnip mash or  mashed potatoes would be nice. The red cabbage and apples dish is a perfect accompaniment to the stew. Tangy with vinegar, sugar, lemon juice and zest, this colorful stovetop dish has sliced apples cooked along with the red cabbage. 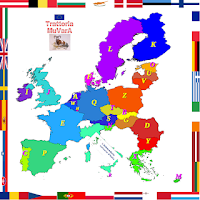 These dishes represent the cuisine of the Netherlands and is the first post for European Community Culinary ABC.  I spent five days in Brugge as well as well as Amsterdam a couple of years ago and was totally smitten with both cities. Belgium, Amsterdam and Luxembourg are called the Benelux countries. The beautiful architecture and lovely canals  were a delight. At the end of this post is a collage of some of the photos that represent the beauty of the city. Mony of Gata d Plar is hosting the letter A for Appeltart. On her blog, you can see what others have contributed for the letter A.

In a large Dutch oven,  add oil and heat over medium-high heat. Brown the beef in batches: Remove and season with the salt and pepper, to taste. Add the celery, onions and carrots. Cook over medium-low heat, until the celery and onion has softened, 10-15 minutes.

Return the meat and any accumulated juices to the Dutch oven. Add the garlic, bay leaves and rosemary, along with the cinnamon and clove-studded orange peel, if you are not using the mulled wine. Add the stock, mulled wine, or regular red wine, vinegar, brown sugar and tomato paste. Cover and simmer for 1-1/2 hours, adding more stock if the meat gets too dry. When the meat is tender, add the brandied raisins and cook for an additional 30 minutes, uncovered.

Taste for seasoning, remove the bay leaves, rosemary sprig, and (if applicable, the cinnamon stick, orange peel and cloves. Serve hot over rice, mashed potatoes or other vegetable mash. Serves 4-6.

Salt and pepper, to taste

In a large saucepan, saute the onions in the butter. Toss in the red cabbage, stir and allow to simmer for 10 minutes. Add the remaining ingredients, along with enough water to cover the cabbage. Simmer for an hour or two, or until soft, but not mushy. Optional-In a small bowl, mix a little bit of the cooking liquid with the cornstarch and add to the saucepan. Allow to thicken. Season with salt and pepper, to taste. Serve hot.

Add the sugar and water to a saucepan and cook over medium heat until the sugar has dissolved. Add the lemon zest to the saucepan, along with the golden raisins, honey, vanilla and spices. Cook on a low heat until the raisins have swelled and softened. Bring to a boil and then using a slotted spoon, scoop the raisins into a couple sterilized jam jars.

Now reduce the remaining liquid until it thickens. Remove from heat and allow to cool. Remove the lemon zest and spices. Pour the liquid over the golden raisins. Add the brandy. Seal jars and store in a cool dry place for 6 weeks. Once opened, keep refrigerated.  Original recipe here. Tips on Sterilizing Jam Jars
I have used these raisins in bread pudding and would be wonderful spooned over ice cream!