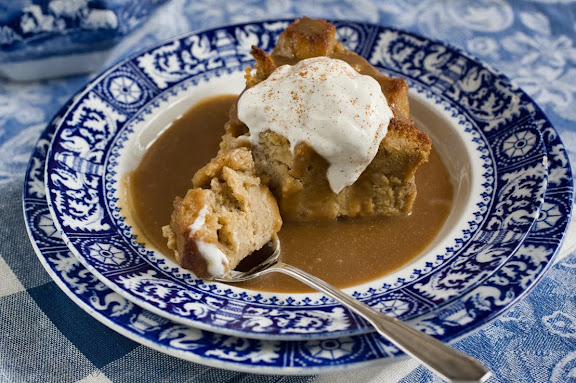 When my grandfather, a policeman during the week and a preacher on Sunday, was shot and killed by a person resisting arrest, my grandmother came to live with us. Mother worked, so Nanny, as we called her, cooked most all the meals for our family. She was a very thrifty cook, using every bit of food to its advantage, so nothing was wasted. Her bread pudding was like no other I have tasted and it was made from leftover biscuits-I don’t think she ever used cornbread, but I wouldn’t have been surprised. This recipe is an attempt to recreate the bread pudding of my childhood. I’m not sure I succeeded as hers had a dense texture, whereas mine was more soufflé-like but nevertheless, this bread pudding is very tasty. My grandmother would have been horrified at the inclusion of rum in her pudding-remember her husband was a preacher! The rum imparts a heady essence to the otherwise bland pudding. Bread pudding adapted from this recipe and the rum sauce from here. Serves 6-8.Bread Pudding with Rum Sauce1 teaspoon unsalted butter4 large eggs1 cup firmly packed dark brown sugar1/2 teaspoon ground cinnamon1/8 teaspoon freshly grated nutmeg1 teaspoon vanilla bean paste or extract1/4 cup dark run2 cups half-and-half8 slices day-old French bread, cut into 1/2-inch cubes (about 4 cups)1 cup raisins, optionalRUM SAUCE:1/4 cup (1/2 stick) unsalted butter1/2 cup whipping cream1/2 cup packed dark brown sugarPinch of salt2 tablespoons dark rumFor the Bread PuddingPreheat oven to 350°F. Grease a 6 cup loaf pan or baking dish with the 1 tablespoon butter. Whisk the eggs, sugar, cinnamon, nutmeg, vanilla extract and rum together in a large bowl until smooth. Add the half and half and mix well. Add bread cubes and raisins, if using. Let the mixture sit for two hours, stirring occasionally.Pour mixture in prepared pan or dish and bake until pudding is set in the center, about 50-55 minutes. Meanwhile make rum sauce. When bread pudding is done, remove from oven. Let sit 5 minutes. Slice and serve topped with rum sauce and whipped cream.To Make the Rum SauceMelt butter in a medium saucepan over medium heat. Add whipping cream, brown sugar and pinch of salt. Bring to a boil, stirring until sugar dissolves. Remove from heat; add rum. Makes about 1 cup. Rum sauce will keep 2 days covered and refrigerated.Other bread puddings from Cafe Lynnylu to try-Dried Blueberry and Candied Pineapple Bread Pudding and Caramelized Pear Bread Pudding.