The 2010 April Daring Cooks challenge was hosted by Wolf of Wolf’s Den. She chose to challenge Daring Cooks to make Brunswick Stew. Wolf chose recipes for her challenge from The Lee Bros. Southern Cookbook by Matt Lee and Ted Lee, and from the Callaway, Virginia Ruritan Club.


Thanks to Wolf of Wolf’s Den for choosing a dish that I have often wanted to prepare, but somehow never got around to making. However, my daughter makes a mean Brunswick stew using most of these traditional ingredients, but uses her own smoked pork which takes the stew to a new level. Inspired by her version, I added chunks of home smoked and grilled pork tenderloin. 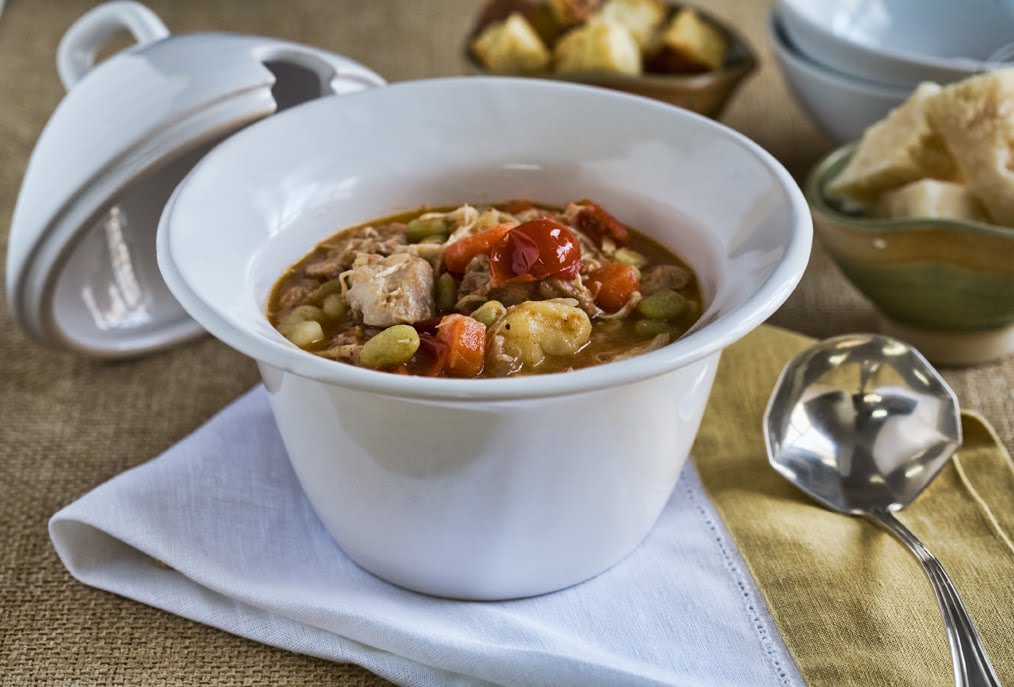 1 4-5lb  chicken, quartered, skinned, and most of the fat removed

1 Tablespoon sea salt for seasoning, plus extra to taste

1-In the largest stockpot you have, , preferably a 10-12 qt, fry the bacon over medium-high heat until it just starts to crisp. Transfer to a large bowl, and set aside. Reserve most of the bacon fat in your pan, and with the pan on the burner, add in the chiles. Toast the chiles until they just start to smell good, or make your nose tingle, about a minute tops. Remove to bowl with the bacon.

2- Season liberally the chicken pieces with sea salt and pepper, add chicken pieces, browning all sides nicely. Remember not to crowd your pieces, especially if you have a narrow bottomed pot. Put the chicken in the bowl with the bacon and chiles Set it aside.

3- Add 2 cups of your chicken broth or stock, if you prefer, to the pan and basically deglaze the pan, making sure to get all the goodness cooked onto the bottom. The stock will become a nice rich dark color and start smelling good. Bring it up to a boil and let it boil away until reduced by at least half. Add your remaining stock, the bay leaves, celery, potatoes, chicken, bacon, chiles and any liquid that may have gathered at the bottom of the bowl they were resting in. Bring the pot back up to a low boil/high simmer, over medium/high heat. Reduce heat to low and cover, remember to stir every 15 minutes, give or take, to thoroughly meld the flavors. Simmer, on low, for approximately 1 ½ hours. Supposedly, the stock may become a yellow tinge with pieces of chicken or smoked pork tenderloin floating up, the celery will be very limp, as will the chiles. Taste the stock, according to the recipe, it “should taste like the best chicken soup you’ve ever had”.

4- With a pair of tongs, remove the chicken to a colander over the bowl you used earlier. Be careful, as by this time, the meats will be very tender and may start falling apart. Remove the bay leaf, celery, chiles, bacon and discard. After you’ve allowed the meat to cool enough to handle, carefully remove all the meat from the bones, shredding it as you go. Return the meat to the pot, throwing away the bones. Add in your carrots, and stir gently, allowing it to come back to a slow simmer. Simmer gently, uncovered, for at least 25 minutes, or until the carrots have started to soften.

5- Add in your smoked pork tenderloin chunks, onion, butterbeans, corn and tomatoes. As you add the tomatoes, crush them up, be careful not to pull a me, and squirt juice straight up into the air, requiring cleaning of the entire stove. Simmer for another 30 minutes, stirring every so often until the stew has reduced slightly, and onions, corn and butterbeans are tender. Remove from heat and add in vinegar, lemon juice, stir to blend in well. Season to taste with sea salt, pepper, and Tabasco sauce if desired.

6 You can either serve immediately or refrigerate for 24 hours, which makes the flavors meld more and makes the overall stew even better. Serve hot, either on its own, or with a side of corn bread, over steamed white rice, with any braised greens as a side.  I used large homemade croutons made from a yeasted cornmeal bread to top my Brunswick Stew and sprinkled grated Parmesan cheese over the top 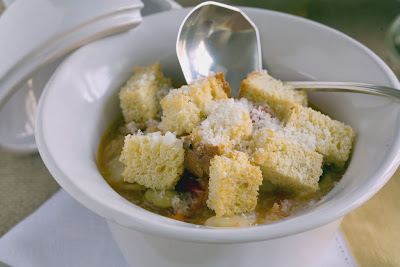 For the Smoked Pork Tenderloin

Thirty minutes to an hour before grilling the pork tenderloin, put 2 cups wood chips in a measuring cup and add water to cover. Salt and pepper pork tenderloin-refrigerate until ready to grill. When chips have soaked, drain off water and wrap them in aluminum foil  or put soaked chips in a smoking accessory for your gas grill. If using the foil wrapped method, poke a few holes in the foil and  place under the grate on top of one of the burners. Close top, preheat on high for 10 minutes or longer until you see smoke coming out of the grill. If your grill is a 2 burner, shut of one of the burners and reduce heat on the other to medium.  If your grill is a 3 burner, shut off the middle burner and reduce the heat on the outer 2 burners to medium. You will be placing your pork over the grate on the burner you have shut off. Grill, turning every 5-10 minutes until pork registers 165-170°F. Remove from grill, let rest 5 minutes.


Recipe 2- The Short Way-This version goes on the assumption that you already have cooked your meats and have broth on hand. This was also my first experience with eating Brunswick stew. It’s got more of a tomato base, has larger, chunkier vegetables, but is just as wonderful as recipe one. However, it is a lot quicker to make than the first recipe.
Brunswick Stew from the, Ruritan Club, served yearly at the Blue Ridge Folklife Festival in Ferrum, Va.

In large stock pot or Dutch Oven, mix all ingredients, heat until bubbly and hot. Add salt and pepper to taste. Add tomato juice as desired. Cook until all vegetables are tender. Serve hot.