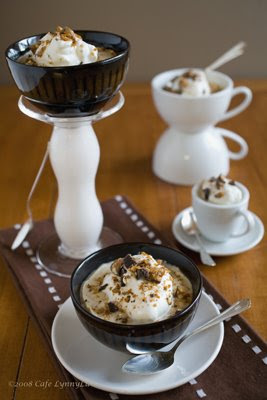 This butterscotch pudding is the real deal, no fake flavors like the boxed version. Do they even make the boxed one anymore? I don’t know since I don’t buy them. Dorie’s Real Butterscotch Pudding chosen by Donna of Spatulas, Corkscrews and Suitcases is rich, smooth with a slight kick by adding a few tablespoons of a 12 year old Glenlivet Scotch whiskey. I was able to buy a small airplane size bottle instead of having to put out the big bucks for a full bottle.The pudding is a little pale for my eyes so will use dark brown sugar next time I make it. I don’t think it would make too much difference in the flavor, maybe even a little deeper butterscotch flavor than with the light brown sugar. After all, one of the definitions of butterscotch is “having a golden or tawny brown” color. According to Wikipedia, “Food historians have several theories regarding the name and origin of this confectionery, but none are conclusive. One explanation is the meaning “to cut or score” for the word “scotch”, as the confection must be cut into pieces, or “scotched”, before hardening. It is also possible that the “scotch” part of its name was derived from the word “scorch”.”Enjoy other posts on Dorie’s Real Butterscotch Pudding from the TWD blogroll. Merry Christmas and Happy Holidays to everyone.