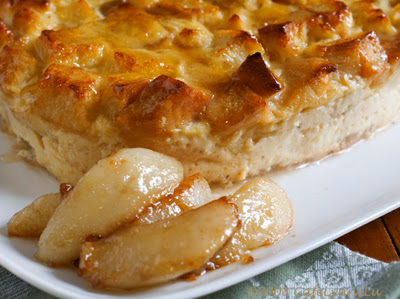 Kristen of DineandDish has a great idea of helping newbie bloggers by matching them with veteran bloggers-those who have had their blogs a year or more. I came into blogging at the insistence of my sister Martha of crossingstitches who knew of my love for cooking and photography and was my main source of encouragement.I am happy to introduce you to Ryles of that’smycake…anddog who in her short time as a blogger was nominated for “best food blog” in the Blogger Choice Awards 2007. I have drooled at her yummy cakes, cupcakes and comfort dishes, but my favorite entry is theonewiththedogs1stbirthday, a hilarious account of baking a “dog” cake for Riddick’s first birthday. Riddick is her Schnauzer whom she loves dearly. I am excited about having Ryles as a blogger friend. I don’t have many cake recipes, but here is a Caramelized Pear Bread Pudding from Eating Well Magazine, Oct-Nov,2006. If you will look at the photo from the Eating Well recipe, you will notice that my photo doesn’t look the same. I followed the directions, but the “caramelized pears” were pale and not photogenic, so I flipped the bread pudding over, caramelized some additional pears separately and glazed the bread pudding with apple jelly. Voila! A disaster averted! 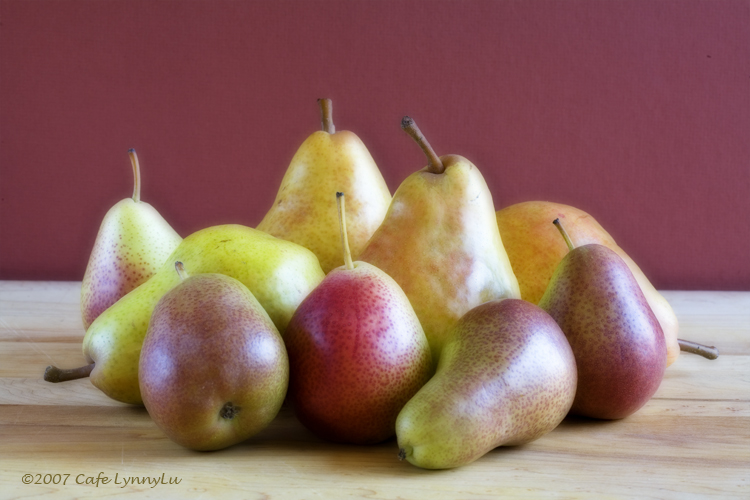 Caramelized Pear Bread Pudding2 1/2 cups low-fat milk4 large eggs1/2 cup sugar, divided1 teaspoon vanilla extract1/2 teaspoon freshly grated lemon zest1/8 teaspoon freshly grated nutmeg4 cups cubed, day-old french bread2 tablespoons golden raisins1 teaspoon unsalted butter, softened, plus 2 teaspoons additional, divided2 firm ripe pears, peeled, halved and cored1 tablespoon lemon juiceHeat milk in a saucepan over medium-low heat, stirring occasionally, until steaming, about 4-6 minutes. In a separate bowl, whisk eggs until blended;gradually whisk in 1/4 cup sugar. Slowly whisk in the hot milk until blended. Add vanilla, lemon zest and nutmeg.Add bread and golden raisins to the mixture; gently fold together. Press down lightly to submerge the mixture. Cover and set aside at room temperature. Butter the sides and bottom of a round or oval 2 quart baking dish with 1 teaspoon butter. Preheat oven to 350 degrees F. Put a kettle on to boil.For caramelized pears, cut each pear into half lengthwise into 4 pieces. Place in a bowl and toss with lemon juice. Heat a medium skillet over low heat until hot. Add remaining two tablespoons butter and swirl until foam subsides. Sprinkle remaining 1/4 cup sugar over the butter. Add the pears arranging them on their side in one layer. Increase heat to medium and without stirring, slowly caramelize the pears, letting them brown, about 10 minutes. Carefully turn pears over and brown and additional 4 minutes to let sauce turn golden. Remove from heat. Carefully transfer the pears one at a time to the prepared baking dish, arranging them decoratively. Using a heatproof spatula, scrape remaining sauce over the pears.Set the baking dish in a shallow baking pan.Spoon the bread pudding mixture into the baking dish. Press down on the bread to submerge it. Place the pan in the oven and slowly pour the hot water into the shallow baking pan until the water reaches halfway up the sides of the baking dish. Bake until brown on the top and set in the center-about 1 1/2 hours. Carefully remove the pan form the oven. Transfer the baking dish to a wire rack and let cool at least 45 minutes. To serve, run a knife around the edges of the pudding. Place a serving platter over it and invert. Serves 8.