For a double rhubarb treat, fresh rhubarb, ginger and dark sweet cherries come together not only in a tangy sweet crisp, but also  in an easy ice cream made with sweet cream, condensed milk and pureed rhubarb. Rhubarb and asparagus enjoy the same growing season with dark sweet cherries coming in little later in the Spring. As a child growing up in the Southern states, we never saw fresh rhubarb, so I grew up intimidated by the long red stalks without a clue how to cook and serve this botanical relative to celery. Rhubarb is easy to grow in the proper climate, but only its stalks are edible. The leaves and roots produce oxalic acid which is quite toxic. Rhubarb is an excellent source of an array of vitamins, minerals, fiber and calcium. Strawberries and rhubarb are often paired together in a pie which led to rhubarb being called the “pie plant”.

Cherries are a good source of vitamin C and are thought to ease the pain of arthritis and other inflammatory diseases such as cancer and heart disease. Dark sweet cherries are delicious eaten alone as a healthy snack. In this crisp, the cherries tame the rhubarb some, but doesn’t overwhelm the dessert. Fresh ginger adds some more zing to the crisp. This dessert and ice cream was a big hit with my family. I used the remaining rhubarb ice cream in a coconut crust ice cream pie.   Pitting the cherries and slicing the rhubarb took some time and I wish I could have been standing on the Chef’s Mat shown on the Foodbuzz Daily Special. The mat may be my next purchase for my kitchen. 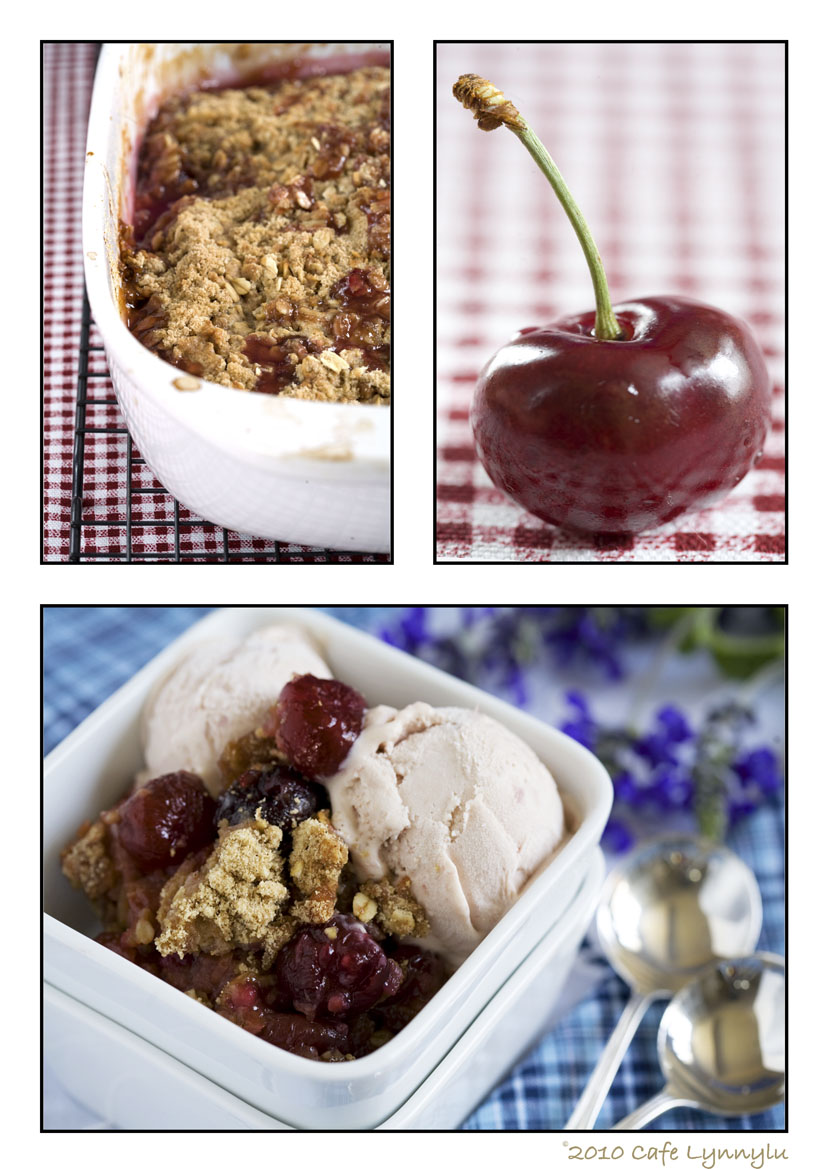 Butter a 9×12-inch baking dish. Preheat oven to 350°F.  Toss rhubarb, ginger and sugar together. Spread evenly over the prepared dish. In a medium bowl, whisk together brown sugar, flour, oatmeal, salt and cinnamon. With a pastry blender, cut in butter. The butter pieces should be about the size of small peas. You may need to use your fingers to finish off rubbing in the butter. Sprinkle flour/butter combination over the sugared cherry rhubarb layer in the baking dish. Combine the water and lemon juice and sprinkle over the topping. Bake for 30 minutes or until lightly browned and bubbly. Serve warm or cold. Makes 8-10 servings. Adapted from “The Wooden Spoon Dessert Book” by Marilyn Moore

In a medium saucepan over medium heat, combine rhubarb, ginger, sugar and water. Bring to a boil, lower heat and simmer for 15 minutes. Using an immersion blender, puree the mixture. Allow to cool. Refrigerate until cold. When cold, whisk in condensed milk, heavy cream, Framboise and vanilla. Refrigerate several hours until cold. Process in an ice cream maker according to manufacturer’s instructions. Makes about a quart.