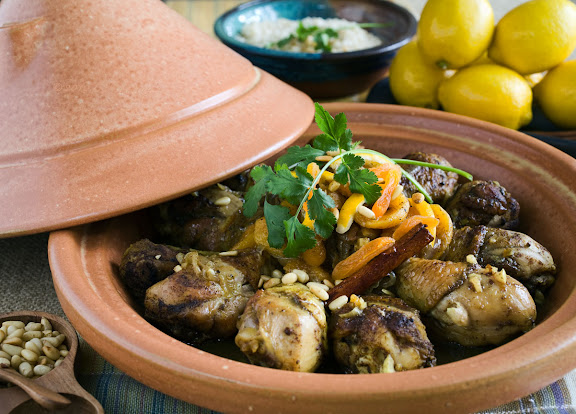 Cinnamon, ground ginger, turmeric and black pepper come together as a flavorful rub for browning drumsticks in this spiced Moroccan tagine dish. The drumsticks are simmered in a sauteed red onion, garlic, cilantro and parsley mixture with orange marmalade glazed Turkish apricots added near the end of cooking. Toasted pine nuts, slices of quick preserved lemons and cilantro garnish. Couscous, the traditional accompaniment, is a very fine pasta made from semolina. Israeli couscous has larger pellets. often called pearl couscous. Both are delicious with this tagine meal. Don’t have a tagine-this dish can be easily made in a skillet. More on how to cure a tagine following recipe.Chicken Tagine with Apricots and Pine NutsAdapted from Epicurious.1 teaspoon ground cinnamon1 teaspoon ground ginger1/2 teaspoon turmeric3/4 teaspoon black pepper1 teaspoon salt, plus 1/4 teaspoon extra3 tablespoons, plus 1 tablespoons olive oil3 pounds chicken drumsticks or 1-3 pound chicken, cut into pieces-wings and backbone discarded1 tablespoon unsalted butter1 large red onion, halved, then sliced 1/4 -inch thick4 garlic cloves, finely chopped5 sprigs fresh cilantro5 sprigs fresh Italian or flat-leaf parsley1-1/2 cups water2 tablespoons bitter orange marmalade1 (3-inch) cinnamon stick1/2 cup dried Turkish apricots, separated into halves1/3 cup pine nutsQuick preserved lemons, pulp removed and thinly slicedAdditional cilantro for garnishcouscousCombine ground cinnamon, ginger, turmeric, black pepper, 1 teaspoon salt and 2 tablespoons oil in a large bowl. Add chicken and turn to coat well.Heat butter and 1 tablespoon oil in the base of a tagine or skillet over moderate heat until hot, but not smoking. Brown chicken in batches, turning over once, 8-12 minutes. Transfer to plate.Add onion and remaining 1/4 teaspoon salt to tagine or skillet and cook uncovered, stirring frequently, until soft, about 8 minutes. Add garlic and cook, stirring occasionally an additional 3 minutes. Tie cilantro and parsley into a bundle with kitchen string and add to tagine or skillet along with 1/2 cup water, chicken and any juices accumulated on the plate. Reduce heat and simmer, covered, 30 minutes.While chicken cooks, bring orange marmalade, remaining 1-cup water, cinnamon, stick and apricots to a boil in a 1-2 quart saucepan, then reduce heat and simmer, uncovered, until apricots are very tender. Once apricots are tender, simmer until liquid is reduced to a glaze, 10-15 minutes. While apricots cook, heat the remaining 1 tablespoon oil in a small skillet over moderate heat. Cook pine nuts, stirring occasionally, until golden 1-2 minutes. Transfer with a slotted spoon to paper towels to drain.Ten minutes before chicken is done, add apricot mixture to the tagine or skillet. Discard herbs and cinnamon stick, then serve chicken sprinkled with pine nuts, preserved lemon slivers and cilantro. Serve with couscous. 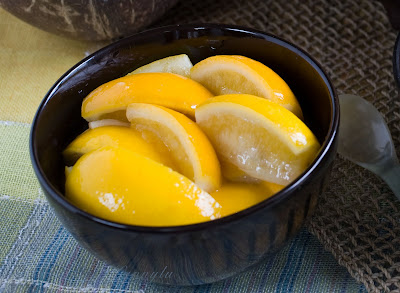 Quick Preserved LemonsTagine, a North African cooking vessel made of terra cotta is constructed of two pieces:a round base and a cone-shaped top with a small hole to allow the heat to escape while the stew, also called a tagine, simmers yielding an intensely flavorful and tender dish. The conical lid is usually unglazed on the inside while the bottom can be glazed or unglazed. Traditional tagines need to be cured before using or they will crack under the heat. Serving tagines need not be cured and are for serving only and not for use on the stove top or in the oven.To Cure a Traditional Tagine1. Soak both pieces of terra cotta vessel in cold water for at least two hours or overnight.2. Remove the tagine from the soaking water. Dry thoroughly and rub the entire vessel inside and out with olive oil.3. Place the tagine on a baking sheet in a cold oven. Turn the oven temperature to 300°F. Set the timer for 2 hours. 4. After the two hours, turn off the heat, but leave the tagine in the oven to cool.5. When cooled, wash the tagine by hand and rub an additional coat of olive oil before storing or using. To maintain the integrity of the tagine, hand wash with mild soap or baking soda after use. Always place a tagine in a cold oven and never add hot liquids to a cold tagine. Maximum oven temperature is 325°F as high heat can cause the tagine to crack. A heat diffuser or flame tamer is recommended when using the tagine on the stove top. Source 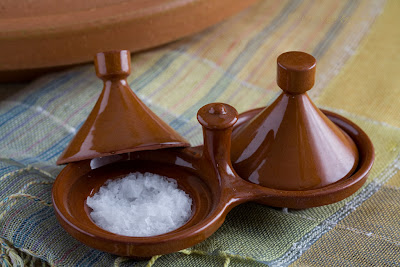