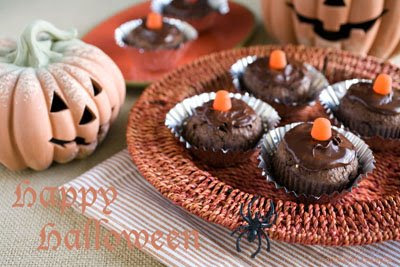 Halloween has sneaked up on me this year, so after this post, I’m going to run out and buy a ton of treats because I get a ton of kids, all ages who trick or treat in my neighborhood. I love the little ones the most. The girls are so cute in their angel or princess costumes and the boys in their favorite football player, cowboy or ghoul costume. The Chocolate-Chocolate cupcakes are my only stab, no pun intended, at preparing for Halloween. Also, I am a little late posting today as my Internet was down so I’ve already seen the very expertly decorated cupcakes that Clara from iheartfood4thought chose for her pick this TWD edition. I made six large cupcakes instead of the 12 standard size. The larger ones seem to photograph better than the smaller ones. The recipe made a scant 6, however, so a couple of mine were a bit on the small side. Dorie suggested filling them with marshmallow fluff which I did, but tinted the fluff orange. However, when I broke into the cupcake, the fluff seemed to have melded in with the cupcake. The lemon meringue cupcakes I made in a previous post had lemon curd piped in the center and I expected the marshmallow fluff to look the same. Maybe there’s a “trick” for my “treat” there that I haven’t figured out. 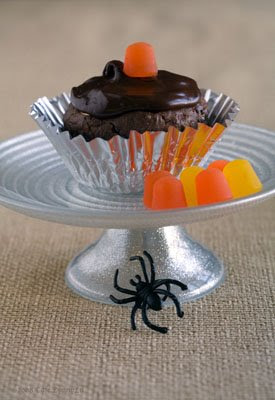 Clara has the recipe on her blog if you don’t have the book “Baking From My Home to Yours”, but also go over to the TWD site to see how everyone else decorated their Chocolate-Chocolate Cupcakes. See you for the next TWD edition when the group bakes Rugelach, chosen by Piggy from Piggy’s Cooking Journal.