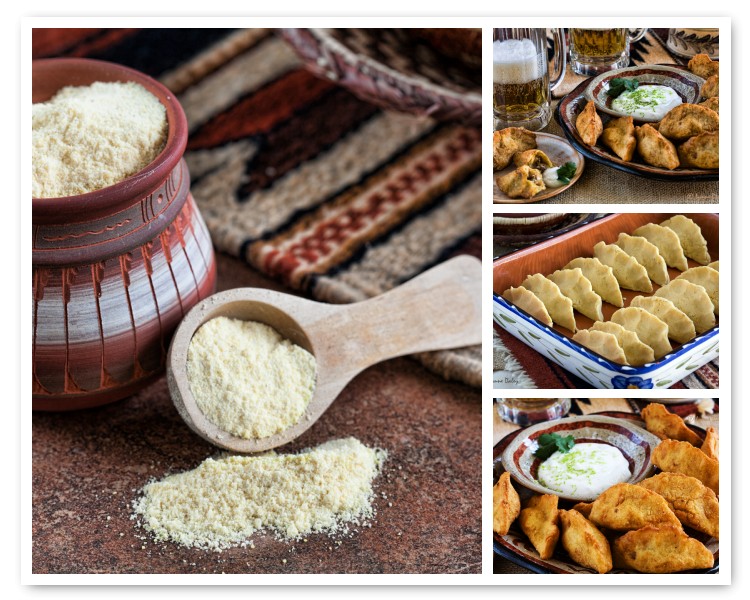 Masa harina, a cousin of cornmeal, actually has a much finer texture and is made from dried corn which has been cooked, ground and then dried again. Its distinctive flavor comes from cooking the dried corn in limewater. When mixed with water, the masa dough is softened and easily shaped into corn tortillas, empanadas, arepas,  chalupas and other vessels to showcase many Mexican and Latin American fillings. A few tablespoons of masa harina can also be used to thicken soup, chili or stew.

Molotes are Oaxacan street appetizers served during special holidays such as Easter, Christmas and Guelaguetza a celebration that traditionally worshipped corn before the arrival of the Spanish. The celebration replete with colorful costumes, music, dances and lots of corn related foods takes place on consecutive Mondays during the month of July. It is said that before the arrival of the Spanish that the celebration included the sacrifice of a virgin slave girl, but after the conquest, Guelaguetza was adapted to the Catholic tradition of honoring the Virgin Mary. Source

To make the molotes, the masa harina is mixed with a small amount of flour, baking powder, shortening and hot water. When a soft dough is formed, it is divided into round balls and rolled into disks. The disks are then filled with a mixture of cooked chorizo, red potatoes, onion and queso fresco or shredded Monterey Jack cheese. The filled molotes are then fried until crisp and golden brown and served with lime enhanced Mexican crema or sour cream. The molotes would be perfect to serve for Cinco de Mayo as they can be made ahead and frozen  up to 1 month prior to frying.

In a large saucepan, cook potatoes, covered in salted boiling water  to cover for 10 minutes or until fork tender. Drain and set aside.

In a large skillet, cook crumbled chorizo and onion over medium heat until chorizo is browned. Drain in colander, pat dry with paper towels.

For filling, combine chorizo, potatoes, onion and cheese; set aside.

Divide masa mixture into 32 balls (2 tablespoons each). On a floured surface, roll each ball into a 3-1/2 inch circle. While rolling balls, keep dough and formed molotes covered with damp paper towels or kitchen towels to keep from drying out. Spoon 1 tablespoon filling into the center of the dough circle. Carefully bring edges of dough over the filling forming a crescent shape. Pinch dough to seal and taper ends. Repeat with remaining dough and filling.

In a heavy saucepan 3 or 4 inches deep, heat 2 inches of oil over medium heat to 350°F. It is a good idea to use a thermometer in order to keep the heat at a constant 350°F. Fry molotes 3 to 4 minutes each or until crisp and golden brown. Drain on paper towels.

Prepare molotes and before frying, arrange filled molotes on a tray. Cover with plastic wrap and freeze. When frozen, place in freezer proof bag. Seal and freeze up to 1 month. Thaw in refrigerator and fry as above.