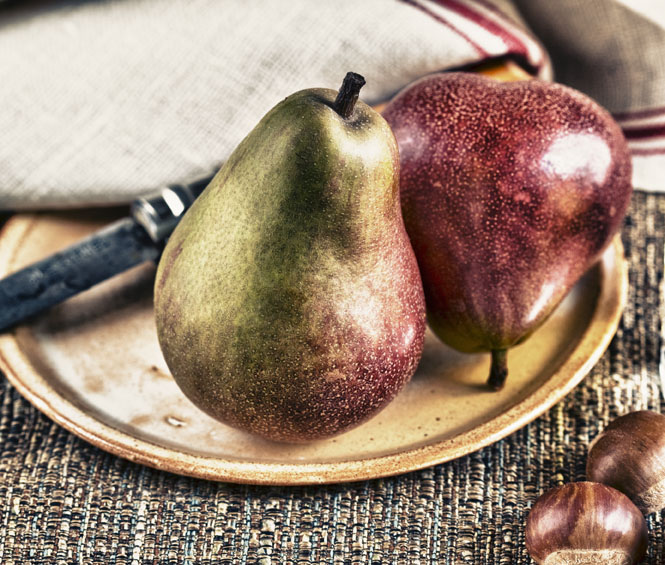 Bathed in sweetened pear cider enhanced with cinnamon and a touch of bay, then baked until tender and caramelized, transforms the diminutive Seckel pear into a tantalizing accompaniment to this creamy classic rice pudding. It is not necessary to peel or core the pears and for more of a homey feel, leave the stems intact. Prepare the rice pudding first to allow the mixture to thicken and cool.

Perhaps a hybrid of Asian and European pears, the Seckel pear, often called a “sugar pear”,is one of the smallest and sweetest pears cultivated. Homage is given to the Pennsylvania farmer who is believed to have discovered the pear around 1820.

Russet colored with brownish yellow and green shades, the tiny Seckel pear is a short plump pear with a grainy texture and a sweet spicy flavor. Perfect for canning and pickling, this bite size pear is also a lovely garnish for salads, cheese plates and sandwiches. Source.

Bake for 25-30 minutes, or until pears are tender and caramelized. Baste with the cider occasionally while baking. Remove from oven when done. Keep pears warm. Place the syrup in medium saucepan and reduce by half. Pour over pears when serving the rice pudding. 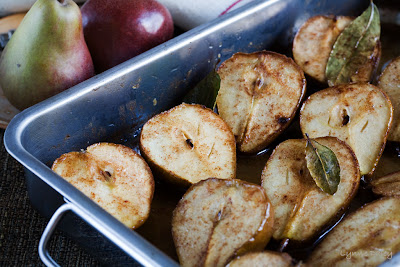 For the Rice Pudding

In a medium saucepan, place the rice in a pan and add the milk, sugar and salt. Bring to a boil over medium-high heat. Reduce heat to medium-low and cook until rice is tender, stirring occasionally to prevent the rice from sticking to the bottom of the pan. When rice is tender, remove from heat and add the vanilla extract and nutmeg, if using. Return to heat and cook 5-10 more minutes, until creamy. The pudding can be served warm or cold.  . Makes 6 servings with the baked pears.

To Serve
Stir the rice to loosen it. If desired add a few tablespoons heavy cream to the rice. Place a generous scoop of rice pudding in a serving dish. Top with two pear halves and drizzle with reduced syrup. Remove bay leaves or add as a garnish. Do not eat the bay leaf. Sprinkle some freshly grated nutmeg over rice, if desired.

*****This is my entry into Weekend Herb Blogging #259 hosted by Susan of thewellseasonedcook.