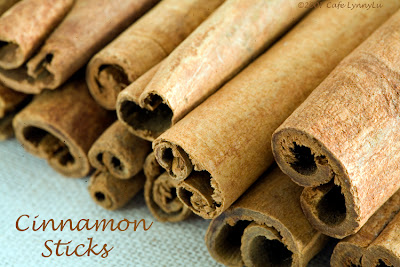 The most widely used spice, Cinnamon has a long history dating back to 2000 BC when it was imported to Eygpt from China. A highly fragrant spice, cinnamon is mentioned in the Bible and other classical literary works and was so highly regarded in the ancient world that it was given as gifts to heads of state and other people of status.Cinnamon is used in nearly all cuisines from appetizers to desserts. Apples and cinnamon have a natural affinity and the smells of cinnamon while cooking evoke an inviting home life. For more information on cinnamon, read here. 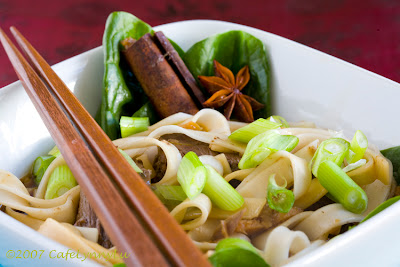 Cinnamon Beef Noodles is a very aromatic soup mingled with the flavors of ginger, star anise, cinnamon and garlic. It’s flavor is only improved by reheating.Ingredients1 teaspoon vegetable oil6 scallions , trimmed and cut into 1 1/2′ pieces and smashed lightly with the flat side of a knife.6 cloves garlic, peeled, smashed and thinly sliced4 slices fresh ginger, smashed lightly with the flat side of a knife and thinly sliced1 1/2 teaspoons hot chile paste2 cinnamon sticks1 star anise8 1/2 cups water1/2 cup soy sauce2 pounds beef stew meat, trimmed of fat and cut into 1 1/2 inch cubes10 ounces spinach leaves, stems trimmed, rinsed and drained1/2 pound flat noodles, such as udon or fettucine, cooked until just tender, rinsed under warm water and drainedTo garnish-3 tablespoons minced scallions.Combine scallions, garlic, ginger, hot chile paste, cinnamon and star anise in a small bowl.Heat a large pot over medium high heat. Add oil, swirl in pan and heat for 30 seconds. Add scallion mixture and stir fry until fragrant, about 20 seconds. Add water and soy sauce and bring to a boil. Add beef and return mixture to a boil. Reduce heat to low and simmer for about 1 1/2 hours or until beef is tender. Skim surface. Remove ginger slices, star anise and cinnamon sticks and discard. Add spinach and bring to a boil.Divide noodles among 6 soup bowls. Ladle the meat, spinach and broth over the noodles and sprinkle with the scallions. Serves 6