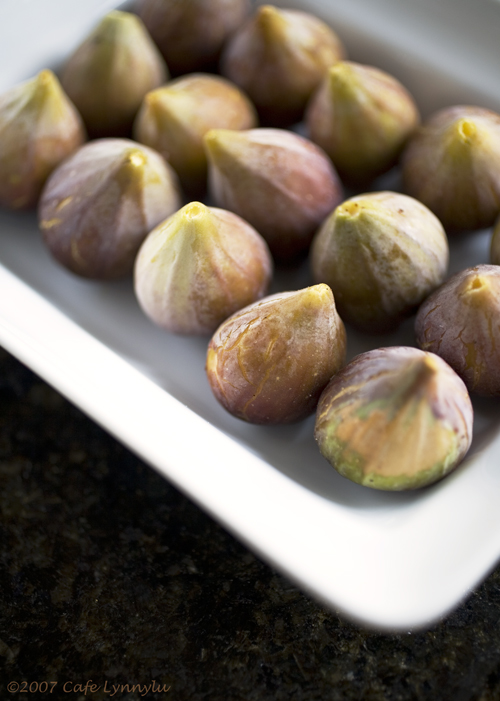 My entry into Waiter, There’s Something in My–Sauce hosted by Andy of SpittoonExtra. Thanks, Andy for extending the deadline.This years fig crop is very short due to no rain and then too much rain. I bought my figs from a small farm stand whose owner buys his figs from two little old ladies who who have a small pension from the government. I was told they were Brown turkey figs, but with the exception of the black Mission figs, they all look pretty much the same to me. I remember as a child that everyone seemed to have a fig tree and we were always being given fig preserves which I couldn’t bear to eat. I guess my palate has gotten more sophisticated.The recipe for the Roasted Figs comes from the August issue of Martha Stewart Living. I have substituted the Brown Turkey figs for the Mission figs. Roasted Figs1 cup ruby port3 star anise3 cinnamon sticks1 tablespoon black peppercorns2 strips orange zest (3 inches long and 1 inch wide)1/4 cup granulated sugar1 tablespoon honey2 vanilla beans, halved lengthwise1 1/2 pounds fresh Mission figs (about 24), halved lengthwisePreheat oven to 350 degrees F. Combine port, anise, cinnamon sticks, peppercorns, zest, granulated sugar and honey in a roasting pan. Use the tip of a knife to scrape vanilla seeds into port mixture, then add pods. Add figs and turn to coat. Roast, basting once, until figs are soft and liquid is syrupy, about 45 minutes. Let cool. figs and syrup can be refrigerated up to one week.Cinnamon Ice Cream2 cups whole milk2 cups heavy cream2 cinnamon sticks1/2 teaspoon ground cinnamon4 extra-large egg yolks1/2 cup granulated sugar(if making ice cream on its own, increase sugar to 3/4 cup. The Roasted Figs are quite sweet.Place the milk, cream, cinnamon sticks, and ground cinnamon in a medium pot. Bring to boil over medium heat. Turn off heat, cover and let stand for 30 minutes to steep.Bring mixture back to a boil over medium heat, stirring occasionally;turn off heat.Whisk eggs with sugar until light yellow. To temper the custard, whisk a few tablespoon warm cream into the eggs. Add another few tablespoon warm milk, then incorporate the remaining eggs into the warm milk mixture. Place pot on stove over medium low heat and cook for 6-8 minutes over medium low heat, stirring until mixture is thickened and coats the back of a metal spoon. Remove from heat;strain and and place container in a bowl of ice, stirring until cooled. Refrigerate at least 2 hours. Process in an ice cream maker according to manufacturer’s instructions.Makes 1 quart.To serve, place ice cream in dish; top with roasted figs and a little syrup poured over. 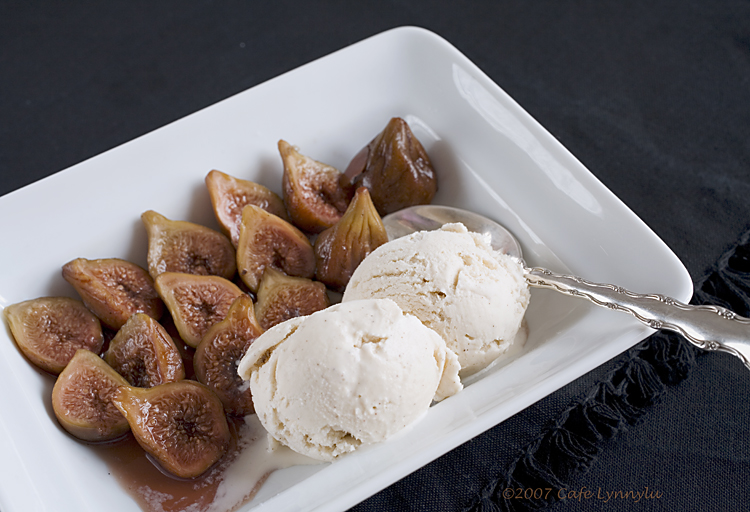