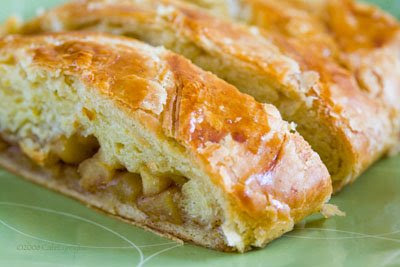 This is one of my favorite Daring Baker challenges as I love yeast breads and especially, sweet ones. Kelly of Sass and Veracity and Ben of What’s Cooking came up with a great buttery sweet yeast braid filled with a cinnamon apple filling that really got me excited about this months challenge. I can’t think of anything I love more than smelling yeast bread baking in my kitchen. This seemed a difficult challenge when I first scanned the recipe and instructions, so I waited until just a few days ago to begin making the braid. Also, we have eaten so many desserts lately that I had to give the sweets a rest.

I followed the recipe and used the orange zest, the orange juice and cardamom, but used vanilla paste instead of vanilla beans. The paste is so much easier than scraping the tiny seeds out of the vanilla bean. I loved rolling out the dough and marking each turn. When I had rolled it out 4 times, I refrigerated it overnight so I could complete the braid the next day.  While making the apple filling, I realized that I didn’t have any lemon juice, so I used fresh orange juice. It didn’t seem to matter in the long run. Braiding the dough after filling it with the apples was a bit of a challenge, especially at each end where I had a much thicker braid than in the middle.  I guess with practice, I would be able to work that problem out. The dough took a long time to rise and I’m not sure I let mine rise enough. After working all day on completing the recipe, I finally was able to photograph the braid around 6 PM.  Surprisingly, I had some beautiful natural light to work with.

The two Danish braids will serve a crowd and is a great make ahead bread.You can find the entire recipe on Kelly’s blog, Sass and Veracity, plus step by step instructions and some very lovely photos. 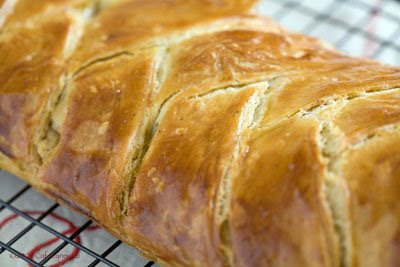