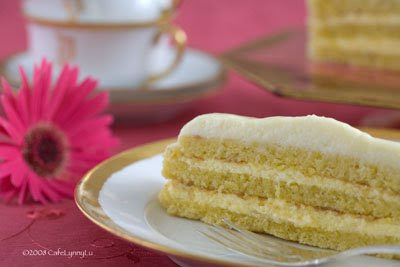 I was singing soprano when I saw the one-half cup of flour still sitting on the counter after I had spread the batter into the jelly roll pans. Jeez, and the joconde looked like the easiest part of this opera cake! Lucky my brother-in-law’s chickens are laying like mad so I had plenty of eggs to start over again. Not so for the almond meal! That means another trip to the grocery store! I race out of the house, hop in the car and in minutes had the almond meal. As I was leaving the store, I stole a glance at myself in the mirror. Was that cake batter in my hair? No wonder the clerk looked at me strange.Back in the kitchen now, so far, so good. The cakes are in the oven and look good. One catastrophe averted. Hopefully, the rest of the cake will go smoothly. I chose to flavor my soaking syrup with limoncello liqueur. As I was making the flavored syrup for the buttercream, I mistakenly added the lemon zest to the syrup at the beginning of the cooking process. I was amazed at the intense flavor of the lemon. The buttercream turned out very good, too.For the white chocolate mousse, I used some white chocolate that had little chunks of coconut added. I could have eaten the entire ganache myself, it was so good!My opera cake went together as well as could be expected considering I hardly ever make fancy cakes, but with practice, I could see myself becoming half way competent. The cake tasted fabulous! Another notch in my belt for the Daring Bakers challenge. I, too would like to dedicate my opera cake to Barbara of winoandfoodies who is an amazing lady. 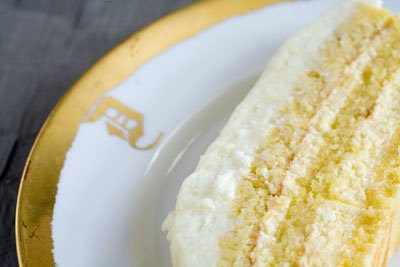 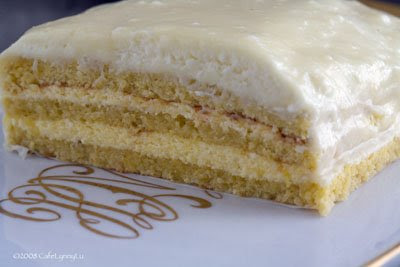