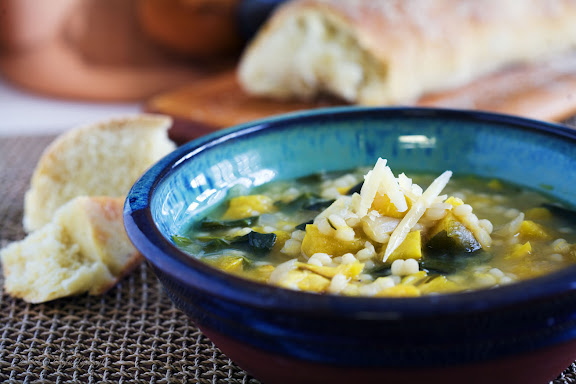 Delicata, a mild creamy winter squash which tastes much like sweet potatoes, Israeli couscous, a small round semolina pasta and fresh spinach leaves team up together in this rustic soup reminiscent of the Umbrian cuisine of Italy where grains, such as farro, spelt and barley and vegetables, are used extensively in the only region of Italy which does not have a coastline. This soup is my “la cucina povera”, literally translated means “cooking of the poor” or peasant cooking, but also means using what you have on hand- a “waste not, want not” theory. One this rainy, cold Saturday, I had no intention of going to the grocery store, so decided to use the onions and garlic I always have. A big bunch of fresh thyme was in the crisper. Two butternut squash have been sitting on my counter for a week or longer now. I have, or had big plans for one of them, but since I used the spinach for that recipe in the soup, those plans will have to wait; the other was free game! The Israeli couscous was shoved in my shopping cart by my daughter a few weeks ago, who said, “Mom, you have to try this since you love to cook and you do have a blog!”. With all those tasty ingredients, I begin to make my soup. Buon Appetito!Delicata Squash Soup with Israeli Couscous and Spinach3 tablespoons extra virgin olive oil3 large cloves garlic, chopped1 large onion, choppedSeveral stems of fresh thyme, tied together with butchers’ twine1-1/2 cups Israeli couscous1 large Delicata squash, halved, seeded and cut into 3/4″ cubes. (There’s no need to peel the squash-it’s very thin-skinned)10-11 cups chicken broth, canned or homemade4 cups fresh spinach leavesGrated Parmesan cheese In a large pot over moderate heat, combine the onions and the olive oil. Saute until onion is translucent and light golden. Add garlic, saute another 2-3 minutes. Add the Delicata squash cubes, saute 8 minutes; stir in Israeli couscous and saute 2 minutes. Add fresh thyme bundle.Add the chicken broth, and bring to a boil. Simmer gently, uncovered until couscous and squash are cooked, about 40 minutes. Season with salt and pepper. Remove the thyme bundle. Stir in the spinach leaves and simmer another 5-10 minutes. Ladle into bowls and sprinkle with Parmesan cheese. Serve with crusty Italian bread. Makes 6 servings.