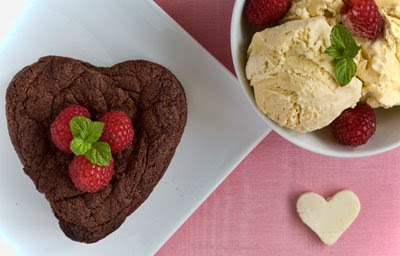 Thanks Wendy and Dharm for choosing such a delightful, easy, but sinful chocolate cake for this months edition of Daring Bakers. The cake was simple to prepare and using the instant read thermometer to check the cake was properly baked was a brilliant idea. It was fun to play with different baking vessels. The caramel vanilla bean ice cream was a perfect accompaniment for the slightly bittersweet chocolate flavor. Raspberries, sprigs of mint and a white chocolate heart as garnishes added some color to the dessert. 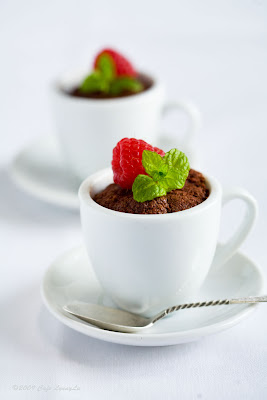 Chocolate ValentinoPreparation Time: 20 minutes16 ounces (1 pound) (454 grams) of semisweet chocolate, roughly chopped½ cup (1 stick) plus 2 tablespoons (146 grams total) of unsalted butter5 large eggs separated1. Put chocolate and butter in a heatproof bowl and set over a pan of simmering water (the bottom of the bowl should not touch the water) and melt, stirring often.2. While your chocolate butter mixture is cooling. Butter your pan and line with a parchment circle then butter the parchment.3. Separate the egg yolks from the egg whites and put into two medium/large bowls.4. Whip the egg whites in a medium/large grease free bowl until stiff peaks are formed (do not over-whip or the cake will be dry).5. With the same beater beat the egg yolks together.6. Add the egg yolks to the cooled chocolate.7. Fold in 1/3 of the egg whites into the chocolate mixture and follow with remaining 2/3rds. Fold until no white remains without deflating the batter. {link of folding demonstration}8. Pour batter into prepared pan, the batter should fill the pan 3/4 of the way full, and bake at 375F/190C9. Bake for 25 minutes until an instant read thermometer reads 140F/60C.Note – If you do not have an instant read thermometer, the top of the cake will look similar to a brownie and a cake tester will appear wet.10. Cool cake on a rack for 10 minutes then unmold. 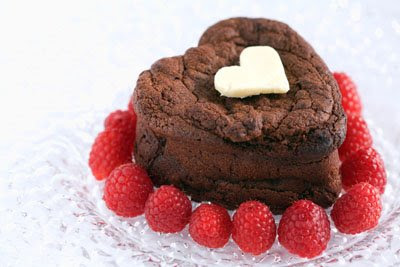 Caramel Vanilla Bean Ice Cream1/3 cup sugar4 large egg yolkspinch salt1 1/2 cup half and half1 cup heavy cream1 tablespoon vanilla bean paste1 cup prepared caramel sauce,plus extra for drizzling over ice cream Whisk together sugar, egg yolks and salt in a medium bowl until blended. Combine half and half and heavy cream in a medium heavy saucepan over medium high heat. Heat until small bubbles form around edge of pan. Remove pan from heat. Temper the egg yolks by adding a ladle of hot cream mixture to the eggs, mixing well. Add another ladle, mixing well, then add all of egg mixture to the cream. Return the saucepan to the stove. Over medium-low heat, stir the mixture constantly until the mixture coats the back of a spoon, about 5 minutes. Do not boil. Strain custard into a large bowl over a larger bowl of ice. When strained, add vanilla bean paste and caramel sauce, mixing well. When cool,remove from ice bath and refrigerate mixture for several hours until cold. Process in an ice cream maker according to manufacturer’s direction. Pack the ice cream in a freezer-proof container and freeze until ready to serve. If the ice cream is frozen solid, place in refrigerator for about 20 minutes to soften slightly. Makes about 1 1/2 pints.