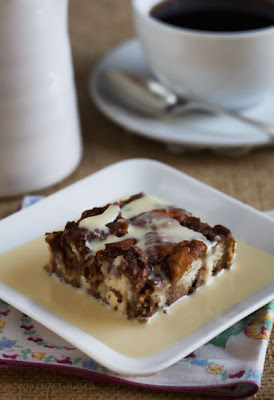 Lauren from uppereastsidechronicle chose Dorie’s Four Star Chocolate Bread Pudding as this weeks pick for Tuesdays with Dorie. Being used to a traditional bread pudding served with bourbon hard sauce, I was not convinced I would like to make one with chocolate, but liked the ease of preparation of this recipe. Because chocolate was an important factor in the pudding, I bought Scharffen Berger semisweet dark chocolate (62% cacao). I wasn’t disappointed, but when I tasted it before serving it, I realized that the pudding needed the creme anglaise to add a silky, moist element to the dryer pudding texture.Lauren has the recipe for the chocolate bread pudding on her blog, but below is the recipe for creme anglaise.Creme Anglaise1/2 cup whole milk1/2 cup heavy cream3 large egg yolks1/3 cup white sugarIn a saucepan, combine milk and cream, bring to just a boil. Meanwhile, in a separate bowl, whisk egg yolks and sugar together until blended. Still whisking, add some of the milk/cream mixture in a drizzle, blending the two together. Continue adding milk to egg and sugar mixture until completely blended. Place the pot back over medium heat, stirring constantly until mixture has thickened and reads 170° degrees on an instant-read thermometer. Remove pan from heat and pour custard into a heatproof bowl. Stir in vanilla extract. Refrigerate until very cold, preferably overnight. Makes about 1 1/4 cups.My post is short this week as I have been traveling most of the month of April and will go to Boston and DC for the remainder of the month, so will catch up with Tuesdays with Dorie in May.