UpDate-01/13/10:In retrospect, I would soften the saffron and the lemon zest in the hot milk for 30 minutes instead of just steeping the lemon zest for 15-20 minutes. 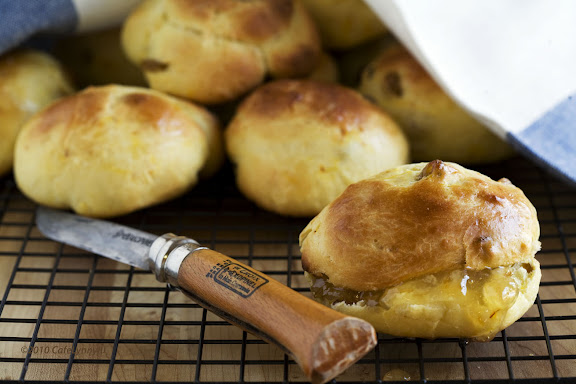 Also known as Cornish Saffron Buns, these dainty tea time rolls were traditionally baked on sycamore leaves and dusted with confectioners sugar. The buns, usually saved for celebrations, are colored a delicate yellow by the addition of saffron and scented with lemon zest steeped in milk to release its essential oils . Golden raisins dotted throughout the rolls enhance not only the color and the flavor, but gives the bread added structure and texture. Serve them for breakfast or tea, split and filled with lemon marmalade or lemon curd. Using the bread machine on the dough cycle makes mixing the dough easier but you can also make the dough by hand. Knead in the golden raisins after removing the finished dough from the machine to keep the fruit whole. Makes 10 buns. Adapted from “Rustic European Breads From Your Bread Machine” by Linda West Eckhardt and Diana Collingwood Butts.

Golden Raisin Lemon Buns with SaffronSponge1/3 cup whole milkZest of 1 lemon, minced2 teaspoons bread machine yeast2 teaspoons sugar1/2 cup bread flourTo Make the Sponge In the Bread Machine:Pour milk into a 1-cup glass measure. Add the lemon zest. Heat on high in the microwave for 30 seconds. Set aside for 15-20 minutes to infuse the lemon flavor into the milk. Meanwhile, add the yeast, sugar and flour to the bread machine pan. After the milk has steeped, add this mixture to the pan. Process on the dough setting until the sponge is well combined, about 5 minutes. Let sit in pan for about 30 minutes or until doubled in bulk.To Make the Sponge by Hand: Pour milk into a small saucepan, heat on medium heat until bubbles form around the sides of the pan. Remove from heat, add lemon zest. Let stand 15 minutes to infuse the flavors. Meanwhile, whisk yeast, sugar and flour together in a large mixing bowl. Add milk/lemon zest mixture. Combine well. Cover with plastic wrap and let sit for 30 minutes, or until doubled in bulk.Dough1/4 cup sugar2 large eggs1/4 cup (1/2 stick) unsalted butter, at room temperature1- 1/2 cups bread flour1/2 teaspoon saltPinch saffron threads (optional, but gives the buns the yellow color)3/4 cup golden raisins1 egg white (for glaze)To Make the Dough in the Bread Machine: To the sponge in the bread machine pan, add the sugar, eggs, butter, bread flour, salt, and saffron, if using. Process on the dough setting. When cycle has completed, turn dough out on lightly floured surface. Knead in the golden raisins. Let rest 5 minutes.To Make the Dough By Hand:To the sponge in the mixing bowl using the paddle attachment, add sugar, eggs and butter; mix well. On low speed, add the flour, salt and saffron threads, if using. Combine well. Switch to the dough attachment and knead dough for about 5 minutes, until smooth, but still soft. Add small amounts of flour, if necessary. Turn out on floured surface and knead in golden raisins. Place in greased bowl, turning to grease top. Cover with plastic wrap. Let rise until doubled, about 45 minutes to 1-hour.To Form and Bake the Buns:Line a baking sheet with parchment paper, or lightly grease the baking pan. Set aside. Turn dough out on a slightly wet surface. With wet hands, divide dough into 10 equal balls and place them on the prepared baking sheet. Cover with plastic wrap and let rise until nearly doubled, about 1- hour. Meanwhile preheat oven to 400°F. and lightly whisk egg white. When rolls are puffy and nearly doubled in size, brush them with the egg white. Bake on the middle rack of the preheated oven for 18-20 minutes, or until golden brown. Remove from baking sheet to cool on a rack for 10 minutes. Serve warm.The authors’ suggest adding 1/3 cup candied lemon peel along with the golden raisins to make these buns a Christmas delight. Candied lemon peel is readily available during this time.