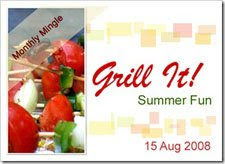 “Grilling, broiling, barbecuing – whatever you want to call it – is an art, not just a matter of building a pyre and throwing on a piece of meat as a sacrifice to the gods of the stomach.”James Beard, ‘Beard on Food’ (1974) These Grilled Spareribs with Oriental Plum Sauce was originally included in previous posts here and here on wild plums that I found in a local farmers’ market. I had a great time making jam, fruit jellies, sauces and ice cream with the plums. However, In retrospect, I believe the grilled ribs were buried deep in the post and not visible to those who read my blogs. I decided to revive the post to include it in Meeta’s Monthly Mingle hosted this month by Sig of Live To Eat.The ribs are cut into bite-size pieces and would be great as part of an appetizer buffet, but can also be served as a main dish. They are first baked to render some of the fat and to insure that they will be tender. This recipe uses spareribs which have a little more fat than baby back ribs and are less expensive, but some say are more flavorful. I remove the tough membrane that adheres to the back side of the rack of ribs. This membrane keeps the flavors from penetrating the meat. More here about how to remove the membrane. The ribs only need salt, pepper, thinly sliced onions and lemons for seasoning while baking. The intense flavor comes from basting the ribs with the Oriental plum sauce when grilling as the last step. The ribs can be baked earlier in the day, the fat drained off, covered and refrigerated until time to grill. Original recipe here Grilled Spareribs with Oriental Plum SauceRibs6 lbs spareribs, membrane removed and cut into serving pieces1 small onion, thinly sliced1 lemon, thinly slicedSalt and PepperPreheat oven to 350° F.Place ribs in large baking pan deep enough to accommodate ribs Scatter lemon and onion slices over the top. Season with salt and pepper. Cover pan tightly with aluminum foil and bake for 1 hour and 20 minutes. Check to see if ribs are tender, if not, bake about 10 more minutes. Drain off fat and set aside while making sauce. Ribs can be cooled, covered and refrigerated to this point.The Oriental Plum Sauce is very simple to make and can be used for a dipping sauce for kebabs, wontons and other Oriental dishes.Oriental Plum SauceIngredients2 tablespoons vegetable oil!/2 cup finely minced onion4 garlic cloves, finely minced2 cups wild plum jam or purchased plum jam1/2 cup honey1/4 cup red wine vinegar2 tablespoons ground ginger1/2 tsp freshly ground pepperHeat oil in medium saucepan, add onion and garlic; saute over medium-low heat until translucent. Add wild plum jam, honey, red wine vinegar, ground ginger and freshly ground pepper. Simmer over low heat for about 5 minutes. Set aside half of the sauce for basting and half for a dipping sauce.Preheat a gas grill on medium heat for 10 minutes. Place ribs on grill, basting with sauce. Turn frequently, basting with more sauce for 15 minutes or until ribs are browned and crisp. Heat remaining sauce and serve with the ribs.