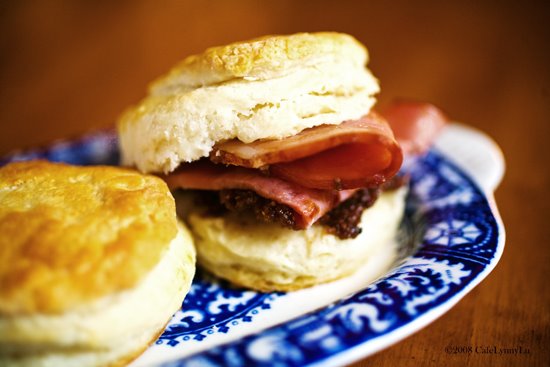 I grew up eating my grandmother’s wonderful biscuits that she mixed by hand in a special wooden bowl that was only used for making biscuits, or dumplings for her juicy peach cobbler. Somehow, I didn’t inherit the biscuit gene, so usually buy frozen biscuits, but when I saw an interesting biscuit recipe in January’s Bon Appetit magazine, I thought I would give them a try. After mixing the biscuit ingredients, the dough was patted out into a rectangle and dotted with thin frozen butter slices, then folded letter style before cutting into biscuit shapes. The effect being similar to making croissants where when baked, the frozen butter releases moisture and the steam allows the dough layers to rise up ensuring flakiness in the biscuits.I always have dried fruit on hand, especially figs which have many uses in my winter kitchen. The Black Mission is my favorite fig. Brought to California by Spanish missionaries from Mexico, the Black Mission fig was first planted in the garden of the Mission San Diego de Alcala near San Diego in 1769 and subsequently planted in the gardens of the string of missions stretching from San Diego to Sonoma, thus the name “mission” fig. Not really black, the mission fig is a dark black purple color. With these figs, I have made brandied figs, granola with chopped figs and have used the figs as part of a stuffing for pork. They are quite versatile and are a powerhouse of nutrition.The biscuit sandwiches are perfect for a Sunday breakfast or when made smaller, a tasty appetizer for a cocktail party.Biscuits2 1/2 cups all purpose flour1 1/2 tablespoons baking powder1 1/2 teaspoons coarse kosher salt1 1/2 teaspoons sugar3 tablespoons solid vegetable shortening1 1/4 cups cold buttermilk, plus extra for brushing biscuits3 tablespoons chilled unsalted butter, very thinly sliced, then frozen.Preheat oven to 425° F. Whisk first 4 ingredients in large bowl to blend. Rub in shortening until like coarse cornmeal; some lumps will remain. Gradually add the buttermilk and work with a fork until dough comes together. Turn dough out on floured surface. Pat out into a 1/4 inch rectangle (about 10×15 inches). Arrange frozen butter in a single layer over the top two thirds of the dough. Fold bottom third over center and top third over center, like folding a business letter. Pat out dough to 3/4 inch thick rectangle. Using a 2 1/2 inch biscuit cutter cut out biscuits, pressing straight down without twisting. Twisting will keep the layers from forming while baking the biscuits. Transfer to an ungreased baking sheet. With bits of leftover dough, press again to 3/4 inch thickness and cut more biscuits. Makes 12 total. Brush with buttermilk.Bake biscuits until puffy and golden, about 20 minutes. To make the biscuit sandwiches, allow biscuits to cool for 15 minutes.Ingredients for biscuit sandwichesbutter for spreading on cut biscuits12 ounces very thinly sliced country ham, warmedBlack Mission Fig Jam(recipe below)Black Mission Fig Jam1/2 pound dried black Mission figs, stemmed and thinly sliced1 cup (or more) water2 tablespoons mild-flavored molasses-(if you don’t have molasses, you can substitute with 2 tablespoons dark brown sugar and 1 tablespoon water mixed together.3/4 teaspoon whole grain Dijon mustard3/4 teaspoon sugar1/2 teaspoon freshly ground black pepper1/4 teaspoon coarse kosher saltCombine figs, 1 cup water and all remaining ingredients in a heavy medium saucepan. Bring to a boil, stirring occasionally. Reduce heat to low. Cook uncovered until figs are very soft and jam is thick, stirring and adding more water by tablespoonfuls to keep jam from sticking, about 45 minutes. Puree jam in food processor, adding water by teaspoonfuls to thin, if desired. Transfer to bowl. Can be made 2 weeks ahead. Cover and refrigerate.To assemble ham and biscuitsPreheat broiler. Slice biscuits in half using a serrated knife. Spread room temperature butter over each side. Place under broiler until butter melts and biscuits are lightly browned.Spread bottom halves of biscuits with jam, top each with a folded slice of ham. Top with top half of biscuits. Makes 12 ham biscuits. Original recipe here on Bon Appetit.