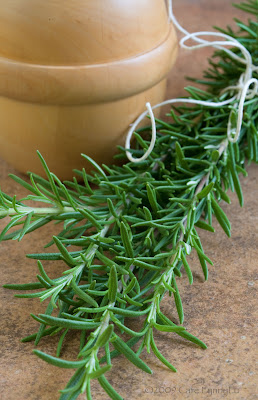 As for rosemary, I let it run all over my garden walls, not only because my bees love it but because it is the herb sacred to remembrance and to friendship, whence a sprig of it hath a dumb language.”Sir Thomas More 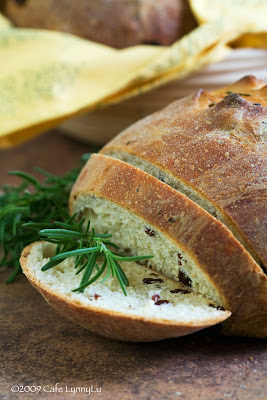 Haalo, from cookalmostanything has taken the helm from Kalyn of kalynskitchen, creator of weekendherbblogging, a very educational and fun blogging event where participants post an entry featuring a particular herb or plant. WHB# 185 is being hosted by Susan of thewellseasonedcook and a well-seasoned host who is enjoying her fifth turn at hosting this blog event. I’m pleased to submit this post to this event.

Derived from the Latin word rosemarinus, ros meaning dew and marinus meaning sea; thus dew of the sea, the herb, Rosemary is native to the Mediterranean and evidently thrived in the salt air and sandy or rocky soil near the sea. In the Middle Ages, rosemary was used as a strewing or incense herb, obviously to cover the strong smells of sickness and cooking odors, but also had happier uses. Brides would wear a rosemary headpiece and wedding guests a sprig of rosemary This strong and unsubtle herb, not lessened by long cooking, should be used in small amounts so as not to overpower the dish. Rosemary is essential to herbes de Provence and combines well with other herbs such as bay, chives, garlic,mint oregano among others. Whole sprigs are used in marinades and older woody stems can be stripped and used as skewers for kebabs. Full stems of rosemary can also be used as basting brushes for grilled meats, vegetables and breads.

Not just for savory foods, rosemary is excellent in cookies, infused in milk or cream for desserts and steeped in simple syrup for summer drinks such as citrus or fruit based drinks.

Rosemary is difficult to grow from seed,so finding a nursery plant will make things easier for you. As rosemary is a slow grower at first, buy an established mature plant.Basically, the rosemary plant will take care of itself, so it’s a great herb for a beginner to plant. Not only for culinary uses, rosemary is a great ornamental plant for your garden and can be trimmed into many lovely shapes, such as the traditional topiary.

Rosemary Raisin bread makes lovely toast for teatime or brunch with it’s subtle rosemary flavor, luscious with a good olive oil and studded with dark plump raisins. This recipe from Beth Hensperger’s “Bread for All Seasons” and adapted for the dough cycle of a bread machine. 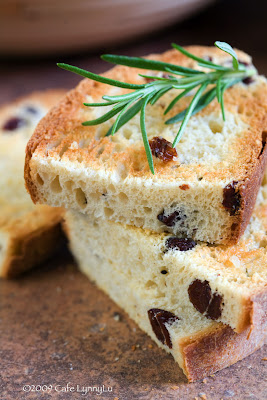 Place all ingredients except raisins and rosemary in the container of your bread machine and process according to manufacturer’s instructions. Add more flour, if needed,to make a soft dough that clears the sides of the machine. At the very last knead cycle, add rosemary and raisins, or when dough as completed its cycle, turn dough out on lightly floured surface and knead in raisins and rosemary.

Divide dough into 2 equal portions. Form into a tight round loaf and place on parchment lined or greased baking sheet. Brush tops with a little olive oil, cover loosely and let rise until doubled, about 2 hours. While the loaves will spread some while rising, they will dome while baking. Twenty minutes before baking, preheat the oven to 350°, with a baking stone, if desired. 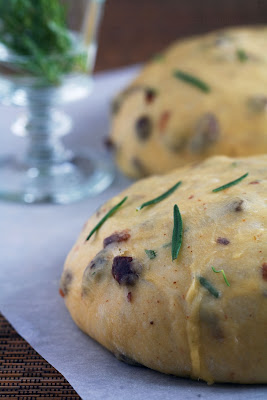 When risen, slash tops with an X shape, no deeper than 1/4 inch. Bake in the center of your oven until evenly browned and sound hollow when tapped, 35-40 minutes. Cool completely before slicing.