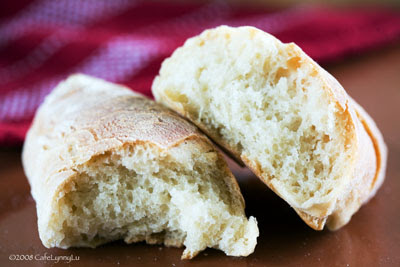 “I don’t think there is a more fundamentally French metaphor:the baguette symbolizes France.”–Steven Kaplan, 1700-1775, author ofThe Bakers of Paris and The Bread QuestionJulia Child sought to make the perfect French bread and hundreds of pounds of flour later, she and Paul Child discovered that to make authentic French bread, you needed to “”simulate a baker’s oven with a hot surface to bake the bread on and steam to form a crust. Read more here. 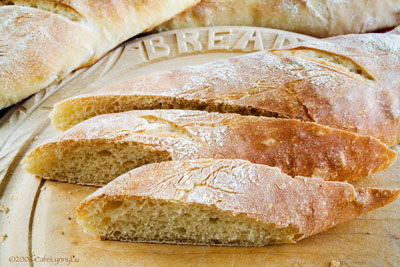 Breadchick Mary of thesourdough and Sara of iliketocook,who are hosting the February Daring Bakers give us some instructions below on how to simulate a bakers oven. For complete French bread recipe, equipment needs and techniques, go here.The Simulated Bakers’ OvenBaking in the ordinary way, as described in the preceding recipe, produces an acceptable loaf of bread but does not nearly approach the glory you can achieve when you turn your home oven into a baker’s oven. Merely providing yourself with the proper amount of steam, if you can do nothing else, will vastly improve the crust, the color, the slash patterns, and the volume of your bread; steam is only a matter of plopping a heated brick or stone into a pan of water in the bottom of the oven. The second provision is a hot surface upon which the naked dough can bake; this gives that added push of volume that improves both the appearance and the slash patterns. When you have the hot baking surface, you will then also need a paddle or board upon which you can transfer dough from canvas to hot baking surface. For the complete set up here is you should have, and any building-supply store stocks these items.For the hot baking surface: Metal will not do as a hot baking surface because it burns the bottom of the dough. The most practical and easily obtainable substance is ordinary red floor tiles 1/4” thick. They come in various sizes such as 6 x 6, 6 x 3, and you only need enough to line the surface of an oven rack. Look them up under Tiles in your Directory, and ask for “quarry tiles” their official name.(Mary and Sara Note: When this book was written, quarry tiles had a fair amount of asbestos in them. Today, in North America and Europe, they normally are made of clay. Make sure if you decide to go purchase some quarry tiles you only purchase unglazed quarry tiles because most of the glazes used contain lead or some other nasty substance that could get transferred. A large pizza stone will also work but make sure it is at least 1/4 inch thick because the thinner ones can break when used at the high heats that baking bread requires. Make sure you never put wet tiles in the oven because they can shatter or worse as the oven heats up.)Each step in the bread making process worked well until I got to taking the dough off of the floured linen cloth. As I was rolling the dough onto the baking sheet, it collapsed! I thought if I deflated them all and started over from the last rising point, there wouldn’t be enough yeast to rise again. I baked the baguettes anyway hoping that I would at least have some edible French bread. The bread was delicious despite the near fatal mistake. 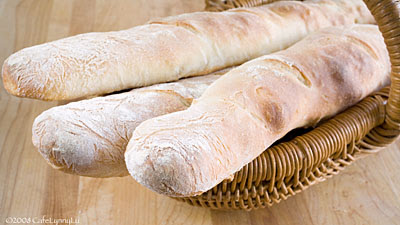