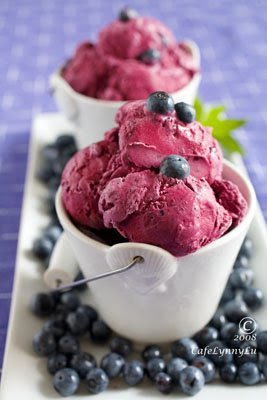 What a perfect Tuesday to make Dorie’s Blueberry Sour Cream Ice Cream. A few days ago, my sister Martha, of crossingstitches gave me a gallon Ziploc bag packed with the most beautiful blueberries I’ve seen this summer. Since then, I have made blueberry pancakes, a blueberry rhubarb crisp and this lovely magenta blueberry ice cream. With the few cups I have left, I plan on making a blueberry corn custard. If it looks good, maybe I will post it in a few days. I’ll be at the beach next week without an Internet connection which is probably a good thing. I need a break from cooking and writing. All I want to do is lounge on the beach and catch up on reading the stack of books on my nightstand. Last summer at the beach, my friends and I took the boat in the little creeks around Savannah to do some crabbing. The crab cakes I made from our mess of crabs were the best I’ve ever had. But on to the Lemon Verbena Sour Cream Blueberry Ice Cream. 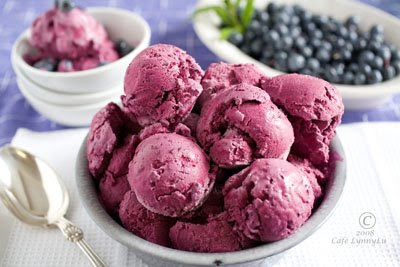 A pint of ice cream doesn’t last very long in this family of ice cream aficionados, so I doubled the recipe without any problems. I considered using lime and lime zest instead of the lemon, but I have a very prolific lemon verbena plant whose leaves I used to infuse the cream instead of the mint as suggested as an alternative. Next time I make the ice cream, I will use the lime zest and juice. 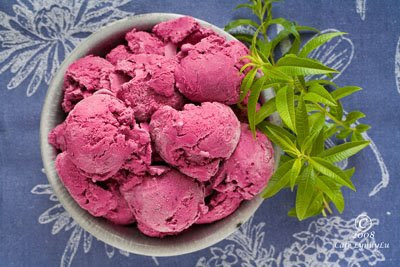 Thanks to Delores of Chronicles in Culinary Curiosity for choosing such an appropriate recipe to beat the heat of August. You will also be able to see the recipe on Delores’ blog.For other variations of the Blueberry Sour Cream Ice Cream, head over to the TWD blog roll.