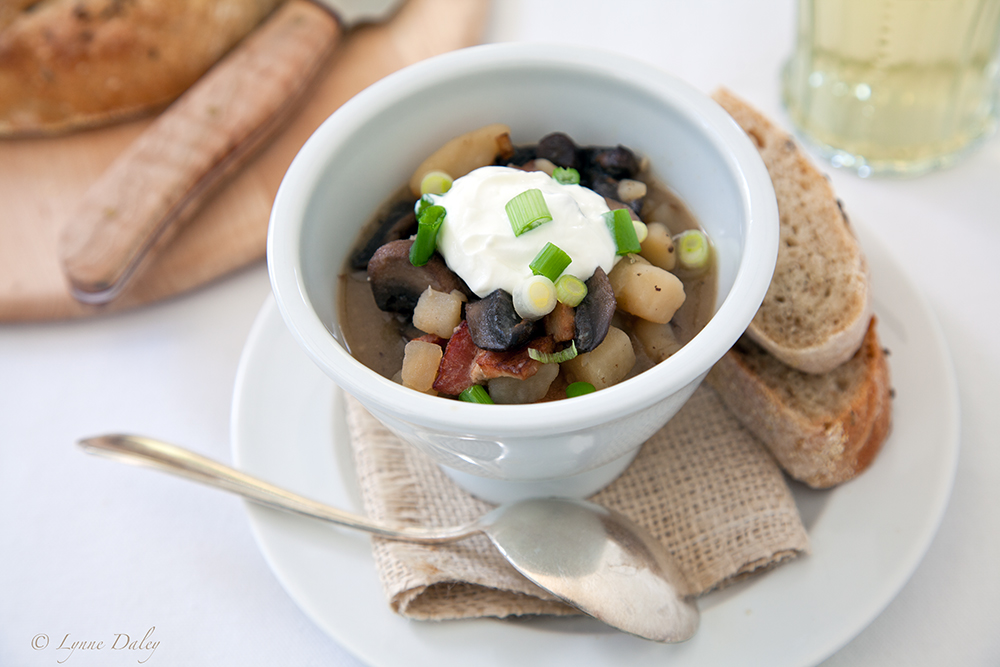 A combination of cremini mushrooms, potatoes and smoked bacon makes a hearty, yet light enough to serve as a first course.  Adding a jolt of flavor to the soup is shiitake mushroom powder quickly made in a coffee grinder. This mushroom  powder elevates this humble soup to the sublime.  Top the soup with a dollop of sour cream and serve with homemade rye bread. Although the cremini mushrooms are flavorful, this soup needed more mushroom flavor which you get from dried mushrooms. In fact, the original mushroom soup recipe uses only dried shiitakes to make the soup. 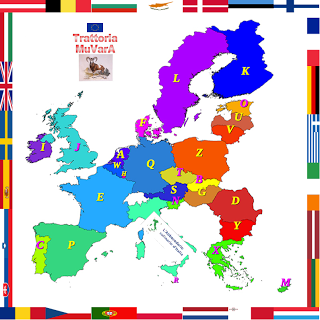 Our culinary journey of the countries of the European Union continues with Slovakia, a totally landlocked country surrounded by  the Czech Republic and Austria to the west, Poland to the north, Ukraine to the east and Hungary to the south. Slovakia is indeed a melting pot of culinary flavors. As there is no real Slovakian cuisine as the food varies from region to region and is based on traditional customs and peasant or provincial cooking. Pork is the most popular meat followed by poultry products. Cabbage and potatoes rank high of the list of vegetables consumed as well as eggs and dairy products. The national dish may well be bryndzové halusky, little potato dumplings with bacon and Bryndza, a soft sheep milk cheese . With this recipe Terry from Crumpets and Co leads us through Slovakia as our “B” month  in the European Union Culinary ABC.

Grind the dried shiitake mushrooms in a spice grinder until finely ground. You should have about 3 tablespoons. Set aside while preparing soup.

Add water to a large soup pot, add mushrooms and potatoes and bring to a boil. Lower heat to a simmer. Meanwhile fry the bacon until crisp. When done, remove the bacon to a plate. Pour off most of the fat, add the flour, stir and cook for 1-2 minutes, then add to the pot along with the cooked bacon. Simmer until potatoes and mushrooms are soft. Add 1-3 tablespoons of the mushroom powder. Stir in sour cream, if desired: Stir to combine. Adjust seasoning. To serve, pour into soup bowls, top with sour cream and chopped green onions. 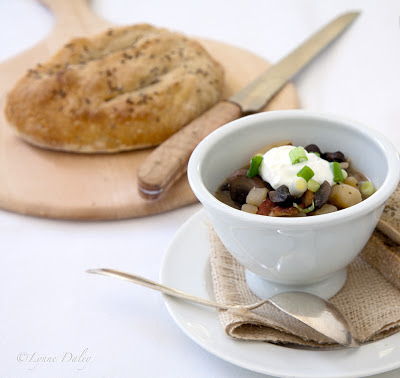 Recipe From Artisan Bread in Five Minutes a Day

1-1/2 tablespoons caraway seed, plus additional for sprinkling on the top crust

Blend 1/2 teaspoon cornstarch with a small amount of water to form a paste. Add 1/2 cup water and whisk well with a fork. Microwave or boil until mixture appears glassy, about 30-60 seconds on high. The wash will keep refrigerated for two weeks. Discard if it has an off smell.