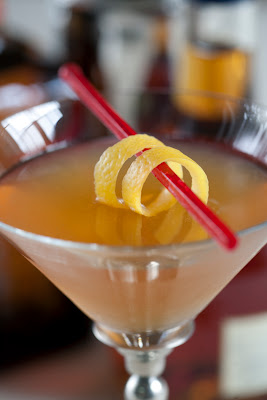 In the The Fine Art of Mixing Drinks, the quintessential book on cocktails by David Embury, he states that the Side Car cocktail is basically a daiquiri with with brandy or Cognac in place of the rum and Cointreau in place of the sugar syrup. Said to be invented by a friend at a bar in Paris during World War 1, the drink was named after the motorcycle sidecar that the American Army Captain was driven to and from the  bistro where the drink was born and christened. Source-The Fine Art of Mixing Drinks.

When originally concocted, the Side Car contained twice the number of ingredients in place of the three that are now traditional in nearly all cocktail recipe books. Embury explains that although the recipe is simplified, the proportions are skewered. Equal parts lemon juice, Cointreau and brandy or Cognac impart a cloyingly sweet taste to the Side Car, designed as an aperitif.

No fancy garnish is needed for the Side Car-only a twist of lemon which is then dropped in the glass. A twist, meaning-“a fresh, soft lemon with clear, unblemished skin.” With a razor sharp paring knife slice off thin strips of the peel about 3/8″wide, lengthwise the lemon. Take care not to include any of the white pulp under the yellow skin. After pouring the Side Car into the chilled cocktail glass, take the peel between the thumb and middle finger and give it a sharp pinch over the glass. 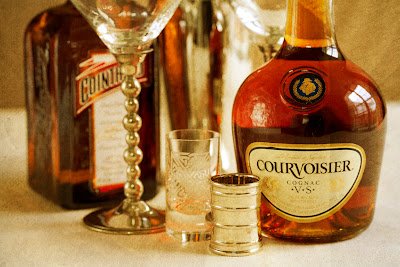 Shake vigorously with plenty of cracked or crushed ice and strain into a chilled cocktail glass. A twist of lemon may be used, if desired and the peel dropped into the glass. Otherwise, no decoration.