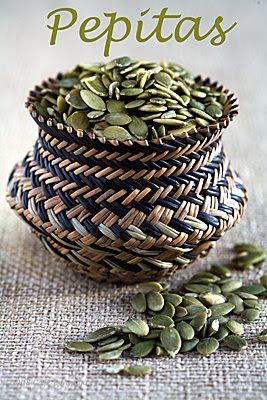 Pepitas are hulled seeds from the calabaza family, better known as the pumpkin, a winter squash. The seeds are used extensively in Yucatecan dishes such pipian verde, an ancient Mexican dish where the pepitas are browned in oil along with garlic, chiles, spices, ground into a paste and made into a sauce which can be served over roast chicken or enchiladas. The Yucatan region of Mexico produces a large number of commercial pumpkin seeds. A few years ago, you could only find pepitas in health food stores or markets in the Southwestern part of the United States, but they are readily available in specialty food stores and Mexican groceries. 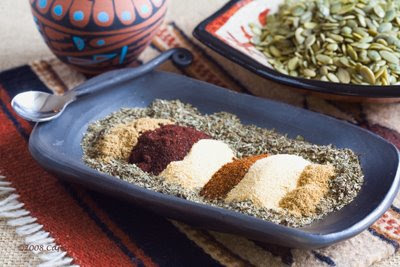 Pepitas are not only a rich source of magnesium, which helps build and strengthen bones and keeps the circulatory system running smoothly, but are packed with protein Vitamin B and Iron as well as monounsaturated and omega6 polyunsaturated fats. To boost the protein in salads or bread, add a few tablespoons of pepitas. Just recently, I made a maple nut granola which includes pepitas along with other healthful seeds and nuts. 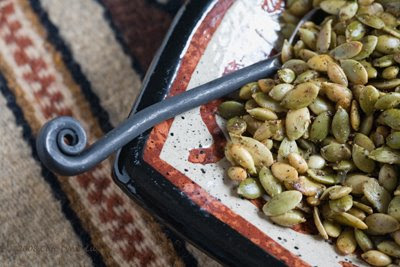 As you probably know from a previous post that I am a great fan of Mexican and Southwestern foods. In a cookbook featuring chipotle peppers, I found a recipe for chili-roasted pepitas using a homemade smoky chili powder. They were an instant hit with my family as a snack and the leftover roasted seeds were sprinkled over a pork chile verde we had for dinner that night.

Combine all ingredients in a bowl, transfer to an airtight container. Keeps for about a month.
Chili-Roasted Pepitas

Over medium heat, preheat a 10″ cast iron skillet or a heavy skillet. In a bowl, combine the seeds, oil, smoky chili powder and salt to taste. Add the mixture to the skillet and cook, stirring constantly, for about 5 minutes, until lightly browned and fragrant. Remove from heat and transfer to a bowl to cool.

Recipe from “Chipotle, Smoky Hot Recipes for All Occasions” by Leda Scheintaub.

This is my contribution to Weekend Herb Blogging hosted by Chriesi of Almond Corner.

One year ago on Cafe Lynnylu-Cinnamon Beef Noodles