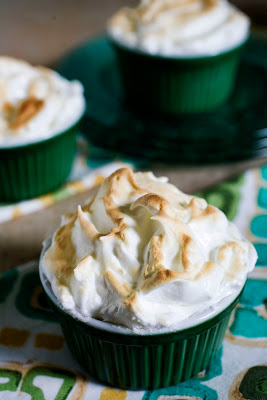 What a shock I had when I went to my refrigerator after the required four hour chilling time! The split level puddings made from orange flavored chocolate and espresso pudding were runnier than when I put them in. Well, that’s what I get for rushing through this dessert so I could photograph it before the football game that my team ended up losing anyway. So I got up early Sunday morning and made the dessert again. This time, I didn’t use the food processor as it was very early and I didn’t want to wake my husband or my sleeping Yorkie. I just mixed the cornstarch, salt and sugar in a small amount of milk, then combined all the ingredients and whisked them well before cooking the pudding.Instead of the orange chocolate, I used plain chocolate for the bottom layer, but kept with the espresso theme. Success! But, I had a failed pudding and six egg whites to deal with. 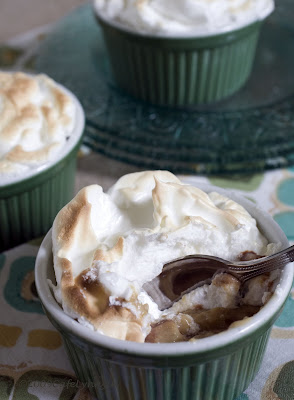 After chilling the puddings,I topped them with a meringue, placed them in a pan of ice to keep the puddings cold, then ran them under the broiler. The failed pudding mixture became chocolate orange espresso ice cream. The only downside was I had two desserts to eat, not just one. Some people wouldn’t call it a downside, but they probably are skinny. It’s time for me to hit the gym! See you next time. 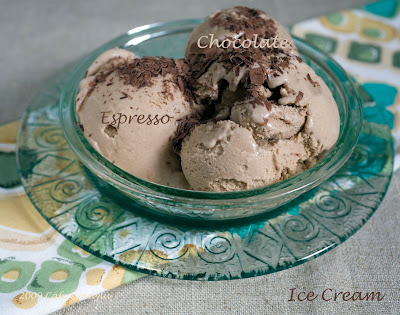 Thanks to Garret of theflavorofvanilla for choosing the Split Level Pudding for this edition of TuesdayswithDorie.