“Tea to the English is really a picnic indoors.”Alice Walker 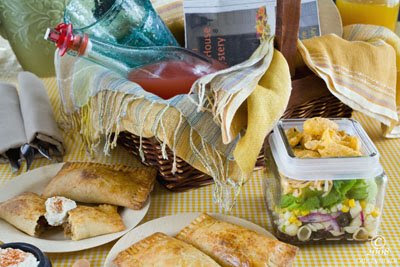 Having lived in England briefly and visit friends there quite frequently, I can say that the English have the picnic down to a fine science. My best picnic memories are of beautiful and rare sunny days with a blanket spread out on the grounds of a stately home with a hamper filled with sandwiches, crisps and small cakes or in my friend’s back garden having a barbecue. I’ve had lovely wine picnics at wineries in Napa, Sonoma and in the mountains of North Carolina. At college football games in the Fall, we call a picnic, a tailgate party. A picnic can be anywhere you choose, even indoors disguised as a tea. I haven’t participated in WTSIM-There’s Something— in awhile, but when I saw that my favorite activity, the picnic, was the theme for the summer edition, I knew I couldn’t miss it. WTSIM rotates among Andy of Spittoon Extra, Jeanne of Cook Sister and this edition’s host, Joanna of The Passionate Cook.In my picnic basket, I have empanadas, a seasoned meat- filled pastry which is baked, a green chile crema to top it, a salad of marinated black beans, pasta salad, seasoned corn, romaine lettuce with shredded cheese and tortilla chips ,all layered in a jar and a watermelon-grapefruit agua fresca to wash it all down with. All can be made in advance. The empanadas can be made days ahead and frozen, then thawed and served at room temperature or warmed and wrapped in foil to take on the picnic. The layered salad can be assembled up to 6 hours ahead and the watermelon-grapefruit agua fresca several hours in advance and refrigerated until ready to pack the basket.Watermelon Agua FrescaIngredients2 cups seedless ripe watermelon chunks1 1/2 cups ruby red grapefruit sections, white pith and seeds excluded2 tablespoons caster sugar1/2 cup water2 tablespoons Triple sec Combine first four ingredients in a blender and process until smooth. Pass through a sieve to remove pulp. Add the two tablespoons of Triple Sec. Taste and add more caster sugar if desired. Makes about 4 glasses. 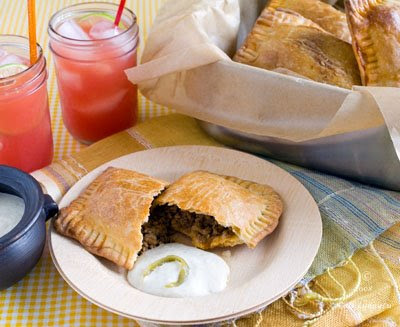 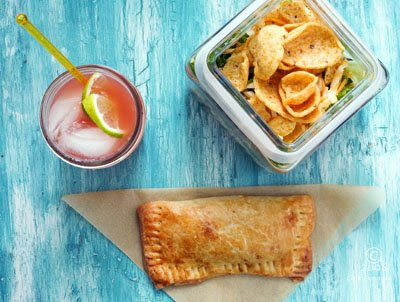 I have taken these empanadas on many picnics with my family. I thought I had lost the recipe, but it miraculously turned up stuck between the pages of Craig Claiborne’s “The New York Times Cookbook” which is probably out of print now. EmpanadasFilling1 pound ground round1 cup beef broth3 tablespoons butter4 large onions, chopped2 tablespoons paprika1 1/2 teaspoons salt1 teaspoon ground cuminGround red pepper to tasteSimmer meat in broth 10-15 minutes, In separate skillet, melt butter and saute onion over medium heat until golden. Stir in paprika, salt, ground cumin and red pepper to taste. Add to beef and simmer for an additional 5-10 minutes. Let cool. Chill thoroughly.Dough1 1/2 cups milk1 cup butter5 cups all-purpose flour2 teaspoons baking powder1 teaspoon salt2 egg yolks, beaten1 egg, beaten, to brush tops of empanadasPreheat oven to 400°F.Scald milk, add butter and let melt over low heat. Cool. Combine flour, baking powder and salt in a large bowl. Make a well in the center, add egg yolks and cooled milk. Blend well. Knead on a floured surface until smooth. Cover and let rest 20 minutes.Divide dough into four pieces. Roll each piece into a 10×15 rectangle. Cut into 6-5″ squares. Place filling on dough, moisten edges with water and fold letter style. Brush with egg wash. Repeat with remaining pieces of dough. Cover until ready to bake.Bake 30 minutes or until browned, turning pan around once during baking. Makes 24 empanadas. Serve with Green Chile Crema.Empanadas can be assembled and frozen on a baking sheet, then popped into ziplock bag and frozen until ready to bake. Preheat oven to 400°F. Place the frozen empanadas on baking sheet. Bake about 30-35 minutes or until golden brown.Green Chile Crema1 can chopped green chiles, drained1 cup heavy cream1 tablespoon olive oil1/2 cup diced white onion2 garlic cloves, minced1/4 to 1/2 cup sour creamSalt and pepper to tasteIn a saucepan,bring cream to a boil over high heat. Lower heat to medium and simmer until reduced to 1/2 cup, about 5 minutes. Heat oil in a skillet over medium heat. Add onion and garlic, saute until softened, stirring occasionally. Place the onion mixture,chopped green chiles and 2 tablespoons water in a blender and puree. Stir into the reduced cream and sour cream. Season with salt and pepper. Makes about 1 cup.