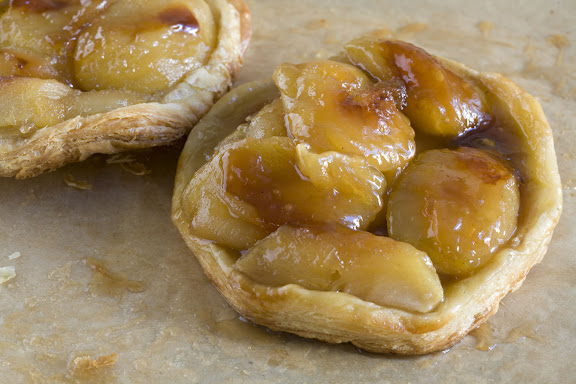 UPDATE: 01/06/10-Just found an article in Food and Wine magazine by Paula Wolfert which features a recipe and photo for Clay-Pot Tarte Tatin. Ms. Wolfert used Golden Delicious apples, butter, lemon juice and sugar which she caramelizes on moderate heat-time 1 hour and 15 minutes! Note the apples are halved and not quartered so time to caramelize could be shorter, but those of us who were expecting a beautiful caramelization in 15 minutes on moderate heat may be encouraged keep the mixture going for a longer time to achieve success. Although pricey, Emile Henry has a tarte tatin set which includes the baking pan plus the serving dish.Many famous dishes have been created totally by accident and the Tarte Tatin, a French upside down apple tart is a classic and delicious example. In 1889, in the small rural town of Lamotte-Beuvron in the Loire Valley region of France, two sisters, Stephanie and Carolina ran the l’Hotel Tatin, an inheritance from their father, Jean Tatin. Stephanie was an excellent cook and manned the kitchen.The hotel was across the street from the railway station and a popular eating establishment for hunters who stayed there. Stephanie’s apple pie was legend, perfectly caramelized apples encased in pastry. It seems that on a busy day in the restaurant, Stephanie was stressed and either put the pie together the wrong way round or left the apples on the stove a bit too long. She attempted to disguise the error by placing a top crust over the nearly burned apples, baking the pie, then turning it upside down to serve. Everyone loved the pie and culinary history was made. It is said that the owner of the Paris restaurant, Maxim’s successfully sent a spy in disguise as a gardener to steal the recipe. The French call this dessert tarte des demoiselles Tatin(the tart of two unmarried women). 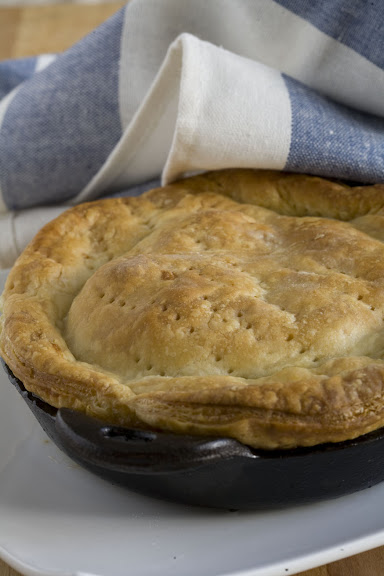 In celebration of Tuesdays with Dorie’s second anniversary, members of the group were given a choice of either the Tarte Tatin or the Cocoa Buttermilk Birthday cake to make for the event. Not a cake fan, I chose the Tarte Tatin. It’s relatively easy using purchased puff pastry, but as they say the “devil is in the details”, meaning achieving a good caramelization of the sugar, butter and sliced apple mixture. Basically, you melt the butter, sprinkle on the sugar, place the sliced apples on the mixture and cook almost to the point of burning the sugar. Since this is the first Tarte Tatin I have made, I chickened out before the apples got to that point,but the tart still tasted great to me!

I used both Golden Delicious apples and Fuji apples, but the Golden Delicious seemed to hold their texture better than the Fuji. Rather than baking one tart, I decided to take advantage of using my cast iron gratin pans that I’ve only used twice since buying them a few years ago. When removing the tart from the oven, take extra care as the caramelized juices are like molten lava. Many thanks to Laurie founder of Tuesdays with Dorie for her diligence in keeping the group organized. Check out TWD and see what this talented group of bakers have done with either the Tarte Tatin or the Cocoa Buttermilk Birthday Cake. Happy New Year to all!BTW-you can find the recipe here.