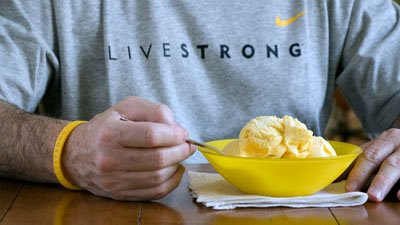 It’s time again for A Taste of Yellow created by Barbara of winosandfoodies to coincide with Livestrong Day, a Lance Armstrong Foundation’s one day drive to raise funds and to educate the public about cancer at the grass roots level. I don’t know Barbara personally, but through her two blog events, A Taste of Yellow and Hay, Hay It’s Donna Day which I have participated in, I know she would be the sort of person I would love to have as a friend. Barbara, a cancer survivor was so inspired by Lance Armstrong’s successful battle with cancer that she created this blog phenomenon which is sanctioned as an official event for Livestrong Day by the Lance Armstrong Foundation.Lemons are about as yellow as you can get and they are plentiful, although expensive and need to be picked carefully as some have more rind than juice. We love ice cream in my family and I make most of what we eat with my ice cream maker. I usually prepare the custard in the morning, refrigerate it for several hours until it’s very cold and then process it in the machine early afternoon so it’s ready for dessert at dinnertime. For a double lemon flavor, I swirled lemon curd into the mixture after I placed it in the pan to put in the freezer. I made my own, but you can use purchased lemon curd as an substitute. 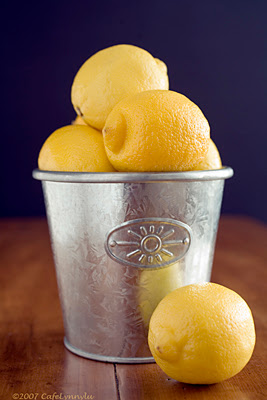 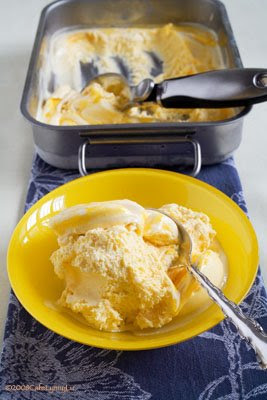 Lemon Ice Cream with Lemon Curd SwirlIngredients1 1/2 cups heavy cream6 egg yolks1 (15oz) can low-fat condensed milk1/2 cup freshly squeezed lemon juiceWhisk egg yolks in a bowl until blended.Bring the heavy cream to a simmer in a large heavy saucepan. Whisk in about a cup of the hot cream into the egg yolks, then add to cream in saucepan. Over low heat, constantly stir with a whisk or wooden spoon until custard thickens slightly, or until coats a metal spoon. Do not boil as eggs will scramble. Patience is needed here as it may take 6 minutes or more for the mixture to thicken. Remove from heat and pass through a fine meshed strainer into a bowl. Let cool slightly, then stir in condensed milk and lemon juice. Cover and refrigerate until very cold. You can speed up the process of chilling by placing the bowl with the ice cream mixture on top of another larger bowl filled with ice cubes. Stir until cooled, then place covered in the refrigerator until cold.Process in one or two batches in your ice cream maker according to manufacturer’s instructions. Place mixture in a shallow pan as shown in photo, swirl in the Lemon Curd, cover with plastic wrap, then cover the entire pan with aluminum foil and place in freezer for several hours. Yields 1 qt.Lemon CurdIngredients4 egg yolks1/2 cup sugar2 teaspoons finely grated lemon peel1/4 cup lemon juice3 tablespoons butterCombine ingredients in a small heatproof bowl over a pot of simmering water, whisking constantly, until mixture thickens slightl and coats the back of a spoon. Remove from heat. Cover and refrigerate until cold. Makes about a cup.Thanks to my husband, Alex for his patience while I photographed him.