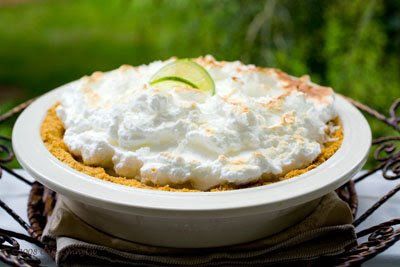 I’ve eaten terrific key lime pies in restaurants in Key West and have made numerous similar pies at home, but none had a intriguing bottom layer of coconut filling as in Dorie’s Florida Pie. A tropical treat chosen by Dianne of Dianne’s Dishes as her pick for TWD Tuesdays with Dorie is a group of bakers preparing and posting about every recipe in Dorie Greenspan’s book, “Baking From My Home to Yours”. As of today, around 20 of those recipes have been completed. It’s a great project.Dorie’s childhood memories of chocolate covered coconut patties, treats brought back from Florida by her parents, inspired her to add this luscious thick filling of sweetened coconut as a bottom layer to the ever popular key lime pie made with key lime juice, sweetened condensed milk and eggs and topped with meringue. 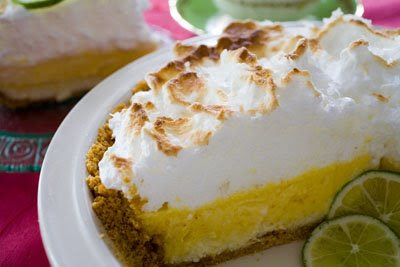 The pie came together quite well, however, the graham cracker crust was a little too crumbly and needed more butter than the original recipe. I used boxed graham cracker crumbs for the first time, but they were a little too fine, so I recommend crumbling your own in a food processor until they are of the consistency you like. The coconut filling took most of the preparation time waiting for the filling to reduce by half. Using clean wooden ruler to measure the filling before the reducing process made it much easier to see when it had thickened and reduced.A nice twist on an old favorite. Check out other Tuesdays with Dorie’s posts on this great little dessert. 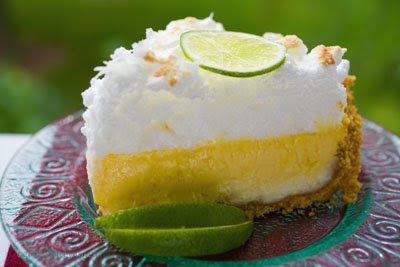 Florida Pie1 9-inch graham cracker crust ,( recipe follows) fully baked and cooled, or a store-bought crust1 1/3 cups heavy cream1 1/2 cups shredded sweetened coconut4 large eggs, separated1 14-ounce can sweetened condensed milk1/2 cup fresh Key (or regular) lime juice (from about 5 regular limes)1/4 cup of sugarGetting Ready:Center a rack in the oven and preheat the oven to 350 degrees F. Put the pie plate on a baking sheet lined with parchment of a silicone mat.Put the cream and 1 cup of the coconut in a small saucepan and bring it to a boil over medium-low heat, stirring almost constantly. Continue to cook and stir until the cream is reduced by half and the mixture is slightly thickened. Scrape the coconut cream into a bowl and set it aside while you prepare the lime filling.Working with a stand mixer, preferably fitted with a paddle attachment, or with a hand mixer in a large bowl beat the egg yolks at high speed until thick and pale. Reduce the mixer speed to low and beat in the condensed milk. Still on low, add half of the lime juice. When it is incorporated, add the reaming juice, again mixing until it is blended. Spread the coconut cream in the bottom of the graham cracker crust, and pour over the lime filling.Bake the pie for 12 minutes. Transfer the pie to a cooling rack and cool for 15 minutes, then freeze the pie for at least 1 hour.To Finish the Pie with Meringue:Put the 4 egg whites and the sugar in a medium heavy-bottomed saucepan and heat over medium-low heat, whisking all the while, until the whites are hot to the touch. Transfer the whites to a stand mixer, fitted with the whisk attachment, or use a hand mixer in a large bowl, and beat the whites at high speed until they reach room temperature and hold firm peaks. Using a rubber spatula, fold the remaining 1/2 cup coconut into the meringue.Spread the meringue over the top of the pie, and run the pie under the broiler until the top of the meringue is golden brown. (Or, if you’ve got a blowtorch, you can use it to brown the meringue.) Return the pie to the freezer for another 30 minutes or for up to 3 hours before serving.Graham Cracker Crust1 1/4 cups graham cracker crumbs3 tablespoons sugarpinch of salt1/2 stick (4 tablespoons) unsalted butter, melted (I would add two more tablespoons)Stir the crumbs, sugar and salt together in a medium bowl. Pour over the melted butter and stir until all of the dry ingredients are uniformly moist. Tip the ingredients into a 9-inch pie pan and using your fingers, pat evenly until the crumb mixture covers the bottom and sides uniformly. Freeze the pan while you preheat the oven. The crust can be frozen for two months covered.Preheat oven to 350 degrees F. Place pan on baking sheet. Bake for 10 minutes. Set aside to cool completely.