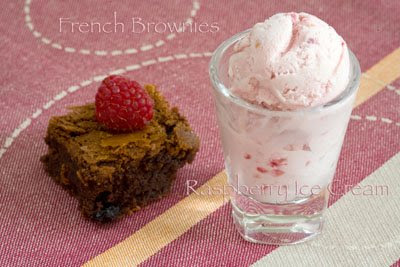 As my British friends say, these are “cracking” good brownies and so was the top crust. When the brownies came out of the oven after 55 minutes, they were just as Dorie described, “dry and crackled”. My brownie recipe never looked like these so I was pleasantly surprised. Apparently, beating the eggs until thick and pale caused this to happen. Lining the dish with buttered foil seem to me to be too much effort, so I just buttered and floured my baking pan. However, I let the brownies cool completely before cutting them. Flambeing the mixed dried berries I used instead of the raisins was the fun part of making the brownies.The mixed dried berries consisted of blueberries, cherries and cranberries so I thought a scoop of fresh raspberry ice cream would be perfect accompaniment to the brownies. Raspberries and chocolate have a special affinity and look great together in a dish such as this. The raspberry ice cream isn’t difficult to make if you have an ice cream maker and a the few hours needed to chill the mixture before processing.Thanks to Di of Di’s Kitchen Notebook for choosing a lovely decadent brownie for this edition of Tuesdays with Dorie. Check out all the posts from this lovely group of TWD bakers. 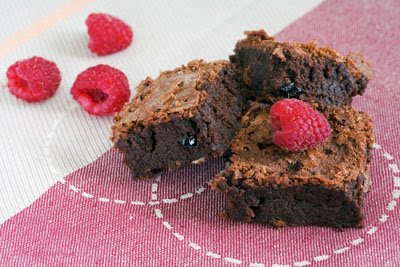 French Chocolate Brownies makes 16 brownies -Adapted from Baking From My Home to Yours.Ingredients1/2 cup all-purpose flour1/8 teaspoon salt1/8 teaspoon cinnamon (optional)1/3 cup mixed dried berries or raisins, dark or golden1 1/2 tablespoons water1 1/2 tablespoons dark rum6 ounces 71 % bittersweet chocolate, finely chopped1 1/2 sticks (12 tablespoons; 6 ounces) unsalted butter, at room temperature and cut into 12 pieces3 large eggs, at room temperature1 cup sugarGetting ready: Center a rack in the oven and preheat the oven to 300°F. Line an 8-inch square baking pan with foil, butter the foil, place the pan on a baking sheet, and set aside.Whisk together the flour, salt and cinnamon, if you’re using it.Put the raisins in a small saucepan with the water, bring to a boil over medium heat and cook until the water almost evaporates. Add the rum, let it warm for about 30 seconds, turn off the heat, stand back and ignite the rum. Allow the flames to die down, and set the raisins aside until needed.Put the chocolate in a heatproof bowl and set the bowl over a saucepan of simmering water. Slowly and gently melt the chocolate, stirring occasionally. Remove the bowl from the saucepan and add the butter, stirring so that it melts. It’s important that the chocolate and butter not get very hot. However, if the butter is not melting, you can put the bowl back over the still-hot water for a minute. If you’ve got a couple of little bits of unmelted butter, leave them—it’s better to have a few bits than to overheat the whole. Set the chocolate aside for the moment.Working with a stand mixer with the whisk attachment, or with a hand mixer in a large bowl, beat the eggs and sugar until they are thick and pale, about 2 minutes. Lower the mixer speed and pour in the chocolate-butter, mixing only until it is incorporated—you’ll have a thick, creamy batter. Add the dry ingredients and mix at low speed for about 30 seconds—the dry ingredients won’t be completely incorporated and that’s fine. Finish folding in the dry ingredients by hand with a rubber spatula, then fold in the raisins along with any liquid remaining in the pan.Scrape the batter into the pan and bake 50 to 60 minutes, or until the top is dry and crackled and a knife inserted into the center of the cake comes out clean. Transfer the pan to a rack and allow the brownies to cool to warm or room temperature.Carefully lift the brownies out of the pan, using the foil edges as handles, and transfer to a cutting board. With a long-bladed knife, cut the brownies into 16 squares, each roughly 2 inches on a side, taking care not to cut through the foil.Serving: The brownies are good just warm or at room temperature; they’re even fine cold. I like these with a little something on top or alongside—good go-alongs are whipped crème fraiche or whipped cream, ice cream or chocolate sauce or even all three!Storing: Wrapped well, these can be kept at room temperature for up to 3 days or frozen for up to 2 months.Raspberry Ice Cream4 cups fresh raspberries1 1/2 cups sugarJuice of half a lemon2 eggs2 cups heavy cream1 cup milkToss the raspberries, 3/4 cup sugar, and the lemon juice together in a bowl. Cover and refrigerate for 2 hours, stirring every 30 minutes. Whisk the eggs in a mixing bowl until light and fluffy, add the remaining 3/4 cup sugar, a little at a time, then continue whisking until completely blended. Heat heavy cream and milk in a saucepan over low heat until tiny bubbles form around the edges of the mixture. Do not boil. Whisk a little hot milk into the beaten eggs and sugar mixture. Add a little more hot milk, then pour mixture back into saucepan. Stir over low heat until mixture thickens slightly, about 6-8 minutes. Let cool slightly. Mash the raspberries and juice until pureed and stir them into the cream mixture. Transfer the mixture to an ice cream maker and freeze following the manufacturer’s instructions. Makes about 1 quart.Recipe adapted from makeicecream.