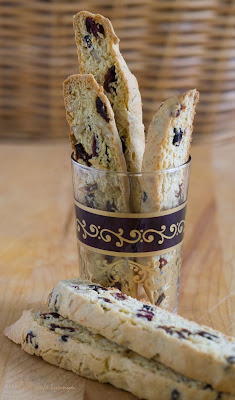 I began making biscotti last year when I saw detailed instructions in “The Baker’s Companion” published by the King Arthur Flour Company. There were three basic biscotti recipes, Traditional Italian Biscotti, Classic Italian Biscotti and American-Style Biscotti. The two Italian biscotti recipes were very similar, having very little fat, however, the American-Style biscotti had unsalted butter in the ingredients. The addition of the unsalted butter made a lighter texture biscotti with a delicate crunch whereas the two very similar Italian versions had the traditional hard texture, perfect for dunking in a cup of coffee or glass of wine. Several things stood out in the step by step instructions: The egg and sugar mixture must be beaten until lemony colored and thick enough to drop in a ribbon from the beaters. When shaping the log, a wet dough scraper along with wet fingers helps mold the log into a neat shape. After the first bake, the log is allowed to cool for about 15 minutes and then spritzed lightly with water from a spray bottle to soften the log for ease of slicing, especially if your biscotti has dried fruits and nuts included. Lastly, standing the sliced biscotti upright for the second bake allows the air to circulate around the slices so they will brown evenly. 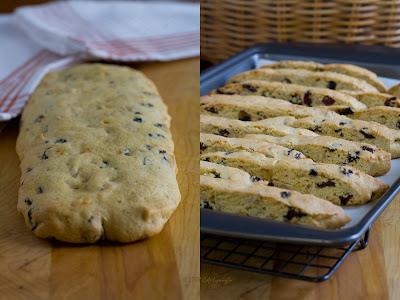 Because I wanted my biscotti to be more Italian traditional hard crunch, I decided to make the biscotti without the addition of the unsalted butter. I use cornmeal in a lot of my yeast breads and love the flavor and texture it lends to the finished product, so kept the flour/cornmeal proportions the same as Dorie’s recipe. Not using the butter enabled me to decrease the baking powder from 1 1/2 teaspoons to 1/2 teaspoon. My other playing around was to add the zest from an orange to the sugar before beating it with the eggs. To the finished dough, instead of the almonds, I added 3/4 cup chopped walnuts and 1 cup mixed dried berries.One day when I bake biscotti again, I will use the butter and maybe I will like it, too. The great thing about baking biscotti is that you can come up with so many different combinations of flavors and textures. Another plus is that for the cost of one expensive coffee shop biscotti, you can make a whole batch. 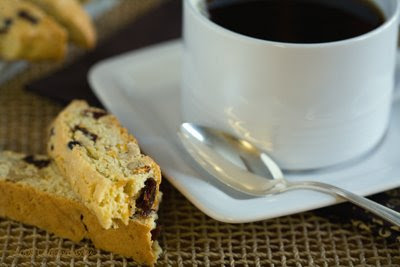 Head over to TWD to check out the Lenox Almond Biscotti and see what other bakers have done with this very flexible biscotti recipe. Thanks to Gretchen of Canela & Comino for choosing such a great recipe for the Tuesdays with Dorie baking group.