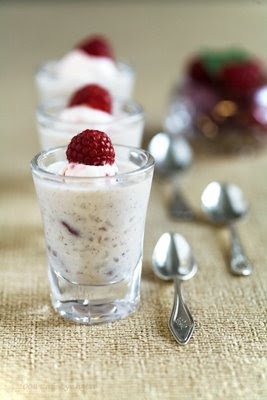 “I know how much you like rice pudding, so you’ll be happy with what I’m making for the Tuesday with Dorie group”, I said to my husband last week. “Well”, he said, “I do like the pudding if it is made properly-it has to be thick and custardy.” Whoops!! I thought I was defeated from the beginning, especially after reading the comments and realizing that this rice pudding will be nowhere near being “thick and custardy”. Nevertheless, he loved it! The pudding was a bit runny even after cooking over an hour, but thickened up some in it’s 5 hour stint in the refrigerator. The Arborio rice, typically used for risotto, was firm and creamy after simmering in the milk. I’m more fond of vanilla flavoring than chocolate and somehow, a chocolate rice pudding didn’t thrill me, so I added a tablespoon of Trader Joe’s Vanilla Bean Paste to my rice pudding. However, I don’t think it is available there now. See the Food Librarian’s post on where to buy vanilla bean paste. Dried raspberries steeped in Framboise completed the flavorings in the pudding itself while I topped the finished product with a fresh raspberry whipped cream.Raspberry Whipped Cream2 teaspoons sugar1 cup raspberries1 1/2 cup cold heavy creamCombine sugar and raspberries. Crush slightly with a fork. Let stand 20 minutes. In an electric mixer with a whisk attachment, whip cream until stiff peaks form; lightly fold in crushed raspberries until a swirl pattern is achieved. Refrigerate until ready to top rice puddings. Makes about 2 cups. Original recipe here.Dessert shots are quite the rage now and I thought that was a good way to contain my puddings. This was all last minute thinking and the sun was sinking fast, so fired off a few shots quickly. Actually, I think the rice pudding shots are a good way to serve the puddings, especially after a rich meal when just a “petite bouchée” satisfies. Thanks to Isabelle from lesgourmandisesdias for her comfort food pick of the quintessential rice pudding. Next week is the Thanksgiving Twofer pie, two favorite holiday pies, pumpkin and pecan, rolled into one with Vibi of lacasserolecarree as host. Also, don’t miss seeing all the lovely variations on the Arborio rice pudding on the Tuesdays with Dorie website. Until next time, “Cheers”! 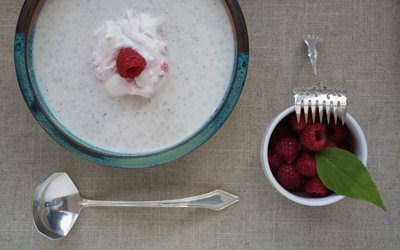 One year ago- Red Onion Slice Still Life from photo-per-diem.