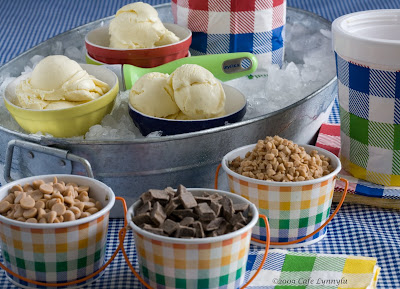 April, a year ago when I joined Tuesdays with Dorie, I was way down the list. Jeez, does time fly. I’m sure everyone who has had the honor thought the same as I. Belonging to such a talented group of bakers has been a great experience. Although there are still many recipes I might have picked for my turn as host of TWD, inevitably, I knew I would choose one of the ice cream recipes in “Baking From My Home to Yours”. Making homemade ice cream has been my culinary joie de vivre. For a wedding present, I received a old style ice cream churn with an electric motor. It was a pain to deal with rock salt and ice so I was thrilled when the Donvier ice cream maker came along. This simple machine had a gel-filled canister that required pre-freezing for 24 hours before processing the ice cream. Easy-no electricity, ice or salt! Just turn the crank and in 15 or 20 minutes you had ice cream. My next ice cream maker was a Cuisinart, an electric version of the Donvier, but had two canisters to pre-freeze and take up space in the freezer. The machine was noisy.Also, I was becoming frustrated with trying to scrape all of the ice cream from around the paddle and sides of the canister.One frustration led to another, so when a friend suggested that I try the original wooden bucket ice cream churn from WhiteMountain, I immediately ordered the 4 quart hand crank model. What fun I have had making ice cream! It’s great for a crowd and there’s always a kid who loves to turn the handle. In 20-25 minutes, you have lush, creamy ice cream that tastes like the old days. Now I have come full circle with ice cream makers. http://www.texascooking.com/features/june2004icecreamfreezers.htmThe only ingredient I added to Dorie’s recipe was a pinch of salt. Just the right amount of salt brings out the sweetness of the custard. Not too much, though, you don’t want the custard to be too salty. 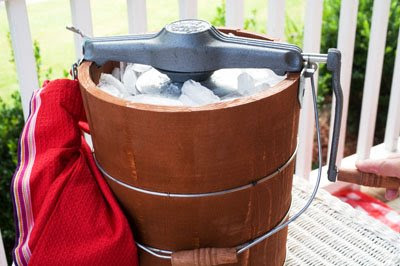 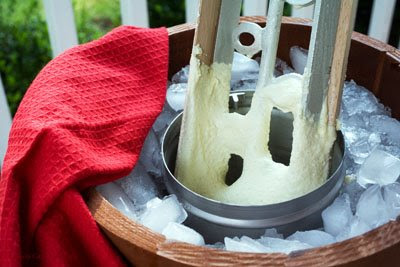 Vanilla Ice Cream2 cups whole milk2 cups heavy cream1 moist, plump vanilla bean, split and scraped,(technique) or 1 tablespoon pure vanilla extract6 large egg yolks3/4 cup sugarBring milk and cream to a boil in a large heavy-bottomed saucepan. If you are using a vanilla bean, put the seeds and pod into the pan, cover and set aside for 30 minutes, then bring the milk and cream back to a boil before continuing. If you are using vanilla extract, wait until later to add it.Meanwhile, in a medium bowl, whisk the yolks and sugar together until very well blended and just slightly thickened. Still whisking, drizzle in about one third of the hot liquid-this will temper, or warm the eggs so they won’t curdle. Whisking all the while, slowly pour in the remaining liquid. Pour the custard back into the pan and cook over medium heat, stirring without stopping, until the custard thickens slightly and coats the back of a spoon; if you run your finger down the bowl of the spoon, the custard should not run into the track. The custard should reach at least 170°F, but no more than 180°F, on an instant-read thermometer. Immediately remove the pan from the heat and strain the custard into a2-quart measuring cup or clean heatproof bowl. Discard the vanilla pod or if you are using vanilla extract, stir it in now.Refrigerate the custard until chilled before churning it into the ice cream.Scrape the chilled custard in the bowl of an ice cream maker and churn according to the manufacturer’s instructions. Pack the ice cream into a container and freeze it for at least 2 hours, until it is firm enough to scoop.Makes about 1 quart. 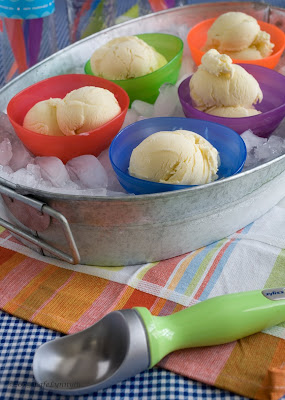 Serving: If the ice cream is very firm, allow it to sit on the counter for a few minutes before scooping or warm it in a microwave oven using 5-second spurts of heat.Storing: Packed tightly in a covered container, the ice cream will keep in the freezer about 2 weeksPlaying AroundYou can flavor the custard before it gets churned into ice cream and/or toss crunchies and other goodies into the ice cream a minute or so before it fully churned.Mint Chocolate Chunk Ice CreamBefore you refrigerate the custard, stir in 3/4-1-1/2 teaspoons pure mint extract or oil. Start with 3/4 teaspoon of extract(or just a few drops of oil), taste and then add more a little at a time, remembering that freezing will tone down the flavor. Just before you finish churning the ice cream, toss in up to 6 ounces of semi-or bittersweet chocolate, coarsely chopped (or use up to 1 cup store-bought mini chocolate chips.Honey-Vanilla Ice CreamHeat 1/3 cup honey with the milk and cream, reduce the sugar to 1/2 cup.Cinnamon Ice CreamReduce the vanilla to 1/2 vanilla bean or 1 teaspoon extract and whisk 1 tablespoon ground cinnamon in with the yolks and sugar. Or, if you’d like to use stick cinnamon, toss 2 cinnamon sticks into the milk and cream and infuse for 30 minutes.Crunchy Ice CreamYou can add up to 1 cup chocolate chips, caramel bits, chopped-up candy bars, chopped toasted nuts, candied nuts, buttered pecans or liqueur-flamed or steeped dried fruits. The dried fruits must be steeped in liqueur or at least plumped in some liquid or the fruits will freeze too hard.Swirled Ice CreamAfter the ice cream has been churned, you can spoon it into a big bowl, pour over swirlables-for instance, jam, chocolate syrup or dulce de leche-and marble them into the ice cream with a sturdy rubber spatula or wooden spoon.Printer Friendly Recipe